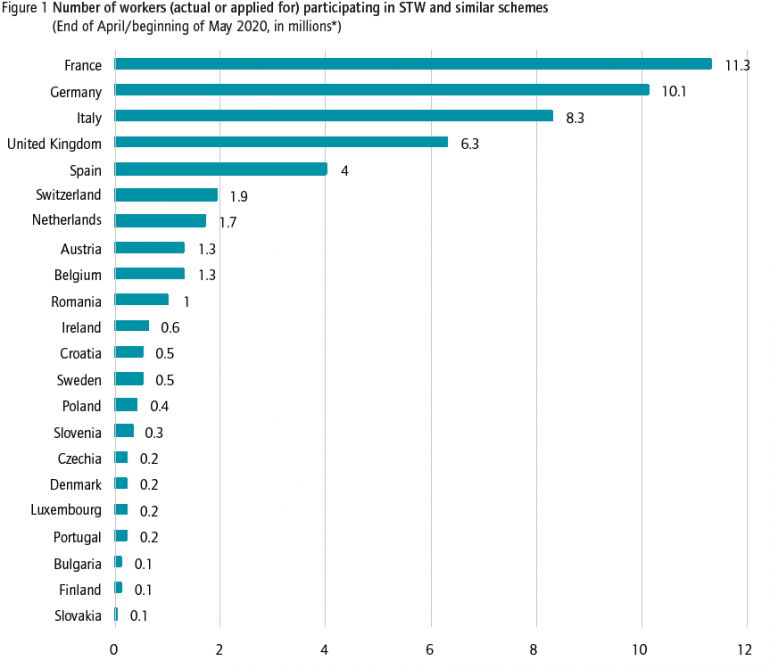 Short-time work as an alternative to dismissals has become widely accepted across Europe as a means to address the economic and social consequences of the COVID-19 crisis. At the end of April 2020, in the EU27 there were more than 42 million applications for support for workers on short-time work or similar schemes. This corresponds to almost 27 percent of all employees. If one includes the United Kingdom and Switzerland, the number of applications for short-time work rises to more than 50 million. These are the findings of a new joint study by the European Trade Union Institute (ETUI) and the Economic and Social Science Institute (WSI) of the Hans Böckler Foundation in Düsseldorf / Germany.

With 11.3 million, France is the country with the highest number, followed by Germany with 10.1 million, Italy with 8.3 million and the United Kingdom with 6.3 million (see also Figure 1 in the annex). In relation to the overall number of employees, Switzerland had the highest proportion of all applications for short-time work (48.1 percent), followed by France (47.8 percent), Italy (46.6 percent) and Luxembourg (44.5 percent); (see also Figure 2 in the annex).

Almost all EU countries now have programmes for short-time work or similar forms of temporary wage subsidies. In recent years, many countries have introduced the possibility of short-time work, some of which have now been substantially extended as part of special crisis programmes. The number of applications is likely to be higher than the number of employees who actually work short-time, because companies often apply for short-time work as a precautionary measure. Nevertheless, an "all-time record high has been reached throughout Europe", write the authors of the study, Dr. Torsten Müller of ETUI and Prof. Dr. Thorsten Schulten, head of the WSI collective agreements archive.

According to Müller and Schulten, the significance of short-time work as an instrument for crisis management can be seen by comparison to the USA, where hardly any short-time work schemes are used and more than 33 million people have already lost their jobs. The researchers stress that it is therefore all the more important to provide financial support for short-time work, as the EU Commission sets out to do with its “SURE” initiative. SURE aims to provide €100 billion of loans to EU Member States in support of their national short-time work schemes. However, "it is already foreseeable that the funds provided by the EU so far will not be sufficient in view of the high number of workers affected by short-time work”, say the authors.

The different national systems vary significantly in the amount and duration of short-time work compensation. Employees on short-time work are often confronted with drastic financial losses. The researchers, therefore, recommend a set of common European minimum standards to ensure fair short-time work which enables workers not only to retain their jobs but also to live a decent life. The recommendations include: