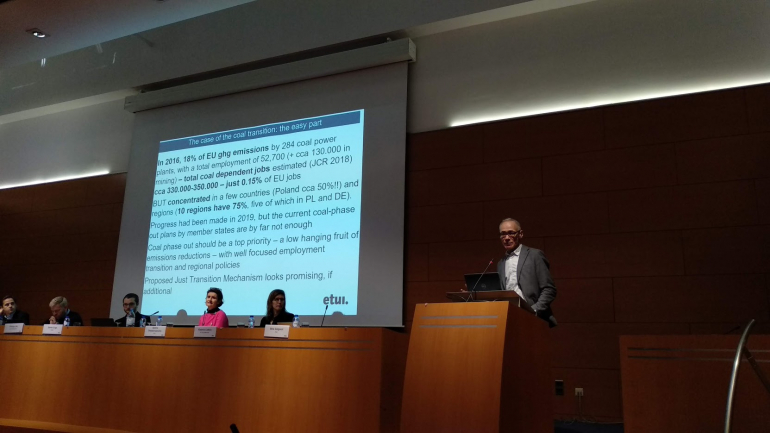 Béla Galgóczi, Senior Researcher ETUI, presented his recently published edited volume “Towards a just transition: coal, cars and the world of work”. According to him the fact that the climate emergency is recognised now is extremely positive, but there are still many questions that remained to be answered. What new resources are there and what does paradigm change really mean? “Every job will be affected, and a just transition approach is necessary”, he said. The coal jobs in the EU are concentrated in Poland and Germany, so the regional character of the issue needs to be recognized.  By now it is clear that the future is for electric cars but for this important labour transformations are needed. For the moment the popular SUVs are financing investments in electric cars which is not a sustainable business model. “Just transition in the coal sector is a regional policy, while automobile is more an industrial policy”, he summed up.  For the trade unions, which are used to manage change, it is different now, as they must drive change forward and at the same time manage the results.

Aleksander Szpor from the Polish Economic Institute, and author of the chapter on the changing role of coal in the Polish economy, said that besides the fact that the Polish energy and climate plans are not satisfactory, the economic viability of the coal sector is very much undermined which turns it to a burden to the Polish economy. However, as the wages in the coal mining sector are twice higher, the minors are not eager to leave their jobs and are not interested in re-skilling programmes. “If we want to reach phase out by 2040 it will be very difficult but not impossible”, he concluded.

Philipp Litz from the German Agora Energiewende, spoke about the role of coal in Germany’s energy system and economy today, and presented the recommendations of Germany’s Coal Commission for the phasing-out of coal which he has worked for. Although the energy transition in Germany has been quite successful in recent years, the German coal consumption in the power sector has not been adequately reduced and greenhouse gasses have not decreased as expected. This is why the coal commission has been set up in order to find “a political compromise for a political conflict”. The plan developed by this commission needs to be implemented now, but it is already clear that it won’t follow the experts’ timetable.

Stefan Guga from Syndex discussed the stakes for the European car industry in a carbon-neutral future. He insisted on the fact that in Europe the car market is very uneven – while in the West sales have increased, in the Southern countries they have collapsed, and the industry is moving eastwards. There are various scenarios for the future with very different outcomes. Investment in new technologies “offers vital opportunities and fatal risks, we do not know whether and when this will pay off”, he said.

Katarina Jaksic representing the Employment, Social Affairs and Inclusion DG of the European Commission, reminded the audience of the main results of the 2019 edition of the European Commission’s flagship analytical report on employment and social affairs, the Employment and Social Developments in Europe (ESDE) review dedicated to the theme of sustainability, with a particular focus on its social dimension. Now, half year later, everything seems to have changed, with the green deal communication already published, and with many of the supporting documents to follow very soon. “But if we want this to work, social partners are crucial agents”, she said, “as the transition should be social from the start”. According to her, this book is “a very valuable contribution to the just transition debate”, as it is sector specific but contains also very concrete and best practice examples.

Ludovic Voet, the ETUC Confederal Secretary in charge of the topic of just transition, welcomed the debate as the presentations showed the huge challenges and uncertainties of the trajectory, and the links with the pathway of the commission. According to him, although the investment level in the green deal of the commission is important, “it is not sufficient compared to what is expected to be invested”. Now only the countries which apply the fund will be asked to develop just transition mechanism, and this cannot be accepted, as it risks producing “a merge between climate and Eurosceptics”. To make it work we need the implementation of the European Pillar of Social Rights, and adequate training programmes showing that EU investment has concrete effect on people.