My name is John, I’m 25 years old and I’m also a trade unionist 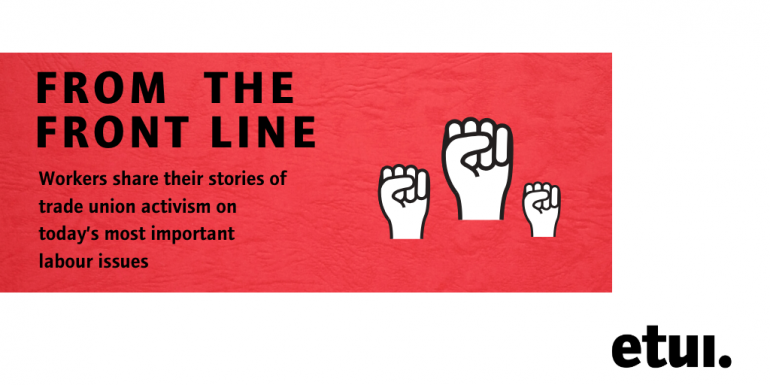 This month, trade unionists from the UK and the Netherlands talk about their struggles to improve working time arrangements in the face of increasing automation and an unhealthy work-life balance. “While we can acknowledge the need to modernise our technology and make it more efficient, it is essential that the profits from this transition go to the workers who have to make way for it, not millionaire board members and shareholders.”

My name is John, I’m 25 years old and I work as a postman for Royal Mail in the United Kingdom.

I’m also a trade unionist – and this is why:

Since the UK government’s decision to privatise [nationwide postal service] Royal Mail in 2013, we have seen a relentless drive towards running public services in the interests of shareholders. This has meant that both the quality of the service we provide and the welfare of employees have been sacrificed in order to maximise private profits. Our most recent challenge has been the attempts by the company to disregard elements of our previous collective agreements, in particular our agreement to move toward a shorter working week for full-time employees. This agreement was crucial in addressing the potential human cost of automation, whereby machines may begin to replace our manual workers. While we can acknowledge the need to modernise our technology and make it more efficient, it is essential that the profits from this transition go to the workers who have to make way for it, not millionaire board members and shareholders.

The Communication Workers Union (CWU) is, in my opinion, one of the strongest in Britain because of its connection with its members. In Royal Mail, the CWU has a representative in every post office, trained to defend the rights of every member, and it is not unusual to find upwards of 90% union membership in many workplaces. In this recent case, after negotiations failed and the company proved unwilling to engage with the CWU, the union mobilised a massive campaign to support a potential strike action. This campaign was led by our workplace representatives and led to a 97.1% vote in favour of strike action on a 76% turnout: over 80,000 votes!

However, the UK has some of the most restrictive anti-trade union laws in Europe and the CWU was taken to court in November 2019. The court overturned our ballot, ruling it illegitimate. Our dispute is just one example of the increasing moves we have seen towards making strike action impossible, driven by a desire to frustrate and undermine our union organisations and erode our capacity to defend ourselves. If we want to halt this present wave of anti-unionism and potential bonfire of workers’ rights, we need our youth to join the fight. Now, more than ever, it is crucial for people to join a trade union.

“We can achieve so much more collectively than individually. With the determination of its members, a union can accomplish real results.”

My name is Marlon, I’m 46 years old and I’m a security guard at Schiphol Airport in the Netherlands.

I’m also a trade unionist – and this is why:

I work for a company called I-Sec that specialises in airport security. Me and my colleagues are responsible for passengers’ safety at the airport by checking their luggage before boarding. I’ve been a member of the Dutch trade union FNV for nine years now. As a union activist, I need to mobilise the other members and convince them that we can accomplish so much more collectively than individually. It helps that I can be a pretty persuasive person!

In union work, there are high and lows. The difficult periods are when I see that colleagues feel intimidated and don’t feel like mobilising anymore. Luckily, there are also good moments. Our last campaign was such an example. In a new round of collective bargaining, we demanded healthier working time arrangements, a wage hike and more job security. In the security sector, working time is a particularly big issue. We have long and late shifts where usually not much happens, but we still have to stay concentrated at all times. We also sometimes have to endure physical and verbal aggression.

The negotiations were blocked at the sectoral level, so we decided to mobilise and stage strike actions. Every so often we would stop work for roughly 15 minutes. We made sure the situation never became dangerous, but the increasingly long waiting lines were enough to really annoy the management. After two weeks of actions and 15-minutes strikes, an agreement was reached. Almost all our demands were met, among them a working time reduction of two hours per week and a wage increase. This was very motivating for me. It showed that, with the determination of its members, a union can accomplish real results.

If you want to find out more about the arguments for a shorter working week, our guide The why and how of working time reduction is a must-read: https://www.etui.org/Publications2/Guides/The-why-and-how-of-working-time-reduction

To read more about the current and future impact of digitalisation and automation on the world of work, check out our Foresight Brief series, in particular: ‘The mirage of the end of work’: https://www.etui.org/Publications2/Foresight-briefs/The-mirage-of-the-end-of-work and ‘Technological revolutions and societal transitions’: https://www.etui.org/Publications2/Foresight-briefs/Technological-revolutions-and-societal-transitions