Overcoming the social costs of climate change, or ‘How to win the war against ourselves’ 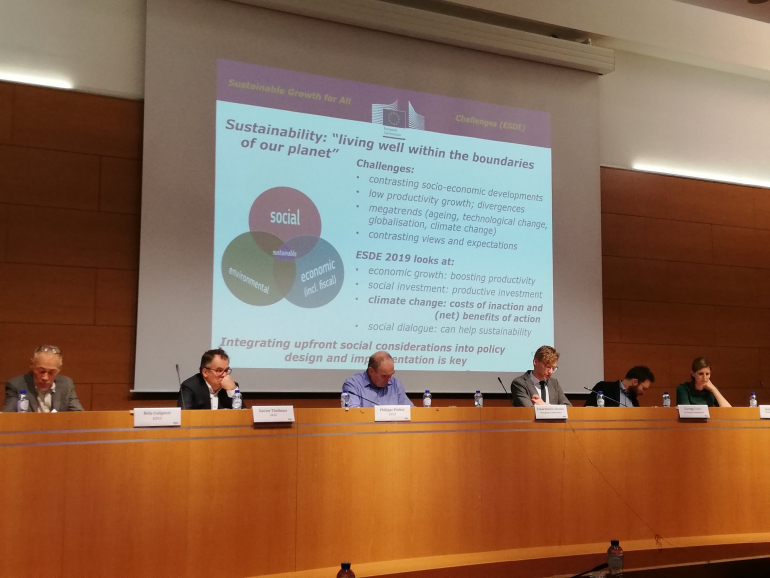 The 2019 edition of the European Commission’s flagship analytical report on employment and social affairs, the Employment and Social Developments in Europe (ESDE) review, was presented at an ETUI conference on 10 September 2019. This event was the first occasion at which the authors presented the report, which was published in July.

This year’s ESDE review is dedicated to the theme of sustainability, with a particular focus on its social dimension. According to Philippe Pochet, ETUI General Director, we need to engage in the discussion on sustainability by approaching it from different perspectives: social, economic and environmental. Frank Siebern-Thomas from the European Commission’s DG Employment, who was the coordinator of the ESDE report, said that this year the authors have looked at areas which they do not usually cover, in order to find out what the connections are between these different dimensions. “The transition is not automatic and not inclusive by default,” he said, adding that “the way forward is an integrated approach”. As the Finnish presidency puts it, sustainable development should be the ‘common denominator’ in all EU action. The main challenges identified by the ESDE report are the uneven socio-economic developments across the EU, the low productivity growth in some regions, the consequences of megatrends (ageing populations, technological change, globalisation and climate change) and the diverging trends in public opinion. Katarina Jaksic and Endre Gyorgy from DG Employment and co-authors of the report focused on its findings on the employment and social impacts of climate change policies. Jaksic pointed to the fact that a significant proportion of those unable to keep their home warm are in middle-income households. Endre Gyorgy said that transition challenges vary across regions, with those which are most affected often having the greatest need for re-skilling programmes. Trade unions can play an important role here as they are “highly useful in preparing workers for transitions”.

Xavier Timbeau, Director of the French Economic Observatory, the OFCE, commented that the report may underestimate the cost of the transition, particularly in a context where the effects of plus-2°C global warming will be very unevenly spread. So-called ‘stranded assets’ (assets that lose economic value well ahead of their anticipated useful life[1]) are also a significant cost to be taken into account. Béla Galgóczi, senior researcher at the ETUI, agreed that the report focuses too much on the opportunities without giving enough attention to the challenges. “There is no direct link between action and impact. It is a cooperative game, and it is not developing well,” he warned. “We also need to realise that job prospects are not good in the manufacturing sector, but this is the basis of the European economy and we need to preserve it.”

In the debate that followed, Ludovic Voet, ETUC Confederal Secretary, welcomed the report as “an important step in considering the economic and social consequences of the climate transition”. However, for the trade unions it is very important to know what exactly the green deal proposed by the Commission will look like, because the climate crisis will endanger everything that trade unions have fought for. He stressed that it is not just a fund that is needed, but “a massive transformation of the economy” accompanied by socially just policies. Erica Hope from the European Climate Foundation said that she has observed an increasing alignment of positions between unions and environmental organisations and thought that they needed to collaborate more. There is a growing acknowledgement that climate experts need to be much more conscious of the social aspects of what they propose. According to Xavier Timbeau: “We need to find ways to mobilise people to win the war against ourselves.” He suggested using certain powerful tools to change our behaviour, such as strong price signals and a multi-layered governance system, as well as ensuring greater solidarity in climate change policies and reflecting on what kind of new democratic model we need in order to deal with this transformation.