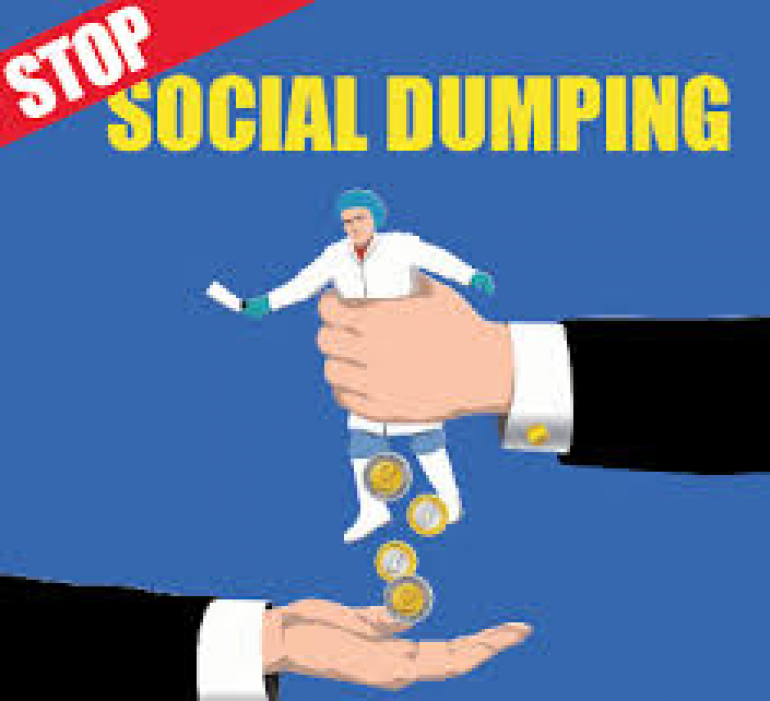 What is social dumping? How to prevent a “race to the bottom” in relation to social conditions in Europe? Is it possible to reconcile economic and social goals of EU integration? These were the questions raised during the panel discussion “Social Dumping: Political Catchphrase or Threat to Employee Standards?”, organised by the European Trade Union Institute at the 23rd Economic Forum in Krynica, Poland. For more than two decades, the Forum has served as meeting point for political leaders, business representatives and academics from Eastern and Western Europe.

The debate was opened by Magdalena Bernaciak, moderator and researcher at the European Trade Union Institute (ETUI). Bernaciak argued that social dumping involved undermining or circumventing the existing social regulations for the sake of enhanced competitiveness. In her view, the term could be used in relation to 1) governments’ practice of lowering social standards aiming at attracting foreign investors, 2) companies’ decisions to relocate production to low-wage countries and 3) worker exploitation and rule evasion accompanying labour migration and cross-border service provision.

According to Jacek M?cina, Secretary of State at the Polish Ministry of Labour and Social Policy, Poland could not be accused of social dumping given that it had adopted the EU social acquis. While M?cina acknowledged that Poland had benefited from production relocations from Western Europe, he also argued that they had helped companies remain competitive and should be viewed as part of a broader globalisation process. Finally, he stated that social conditions in Poland could not be improved via a government decree, but rather as a result of growing employment rate and investments in human capital.

Johannes Willemen, Vice-President of the European Construction Industry Federation (FIEC), agreed that Poland’s economy had developed significantly since EU accession. He stated that he was in favour of free movement of workers and services in the enlarged EU, but he objected to Central-Eastern European workers’ exploitation by those who posted them to Western Europe and did not pay them according to local wage rates. In Willemen’s view, such practices hurt not only the economy of the host county, but also that of the sending state, due to unpaid taxes and social contributions.

A similar view was expressed by Veronica Nilsson, Confederal Secretary of the European Trade Union Confederation (ETUC), who argued that social dumping had been facilitated by the European Court of Justice’s jurisprudence. “Minimum rules set out in the Posted Workers’ Directive have been interpreted [by the ECJ] as maximum obligations” – she explained. Nilsson also pointed to a race-to-the-bottom threat posed by the new EU macroeconomic surveillance system, in particular by country-specific recommendations.

“Already before Poland’s EU entry, we as a trade union warned that Poland might become a victim of social dumping as soon as a cheaper country joins the EU” - argued Janusz ?niadek, Polish MP and the former President of the Solidarno?? trade union. ?niadek noted that certain policies pursued by the Polish government, such as those aiming at increasing labour market flexibility and raising the retirement age, could also be viewed as social dumping.

Ivo Šlaus, President of the World Academy of Arts and Science, reminded that social dumping is not an exclusively European affair, and that China, India or Mexico are often in focus of social dumping concerns. He claimed that a regulatory “race to the bottom” entailed the destruction of human capital - the economy’s most precious asset. He thus advocated a new cohesion policy that would minimise differences between countries, at the same time maximising the returns from their social and human capital.

While discussing possible solutions to the social dumping problem, M?cina argued that flexicurity policies reconciled the goals of competitiveness and social protection. Willemen, in turn, pleaded for better law enforcement and the extension of Labour Inspection’s rights. In relation to the construction industry, he pointed to the role of chain liability but acknowledged that it might be difficult to ensure the transparency down the subcontracting chain. Last, but not least, Nilsson called for the so-called Social Progress Protocol to be included in the EU’s primary law: “it should be explicitly stated that economic freedoms do not have priority over social rights” – she concluded.