The doughnut revolution as an alternative to the growth paradigm 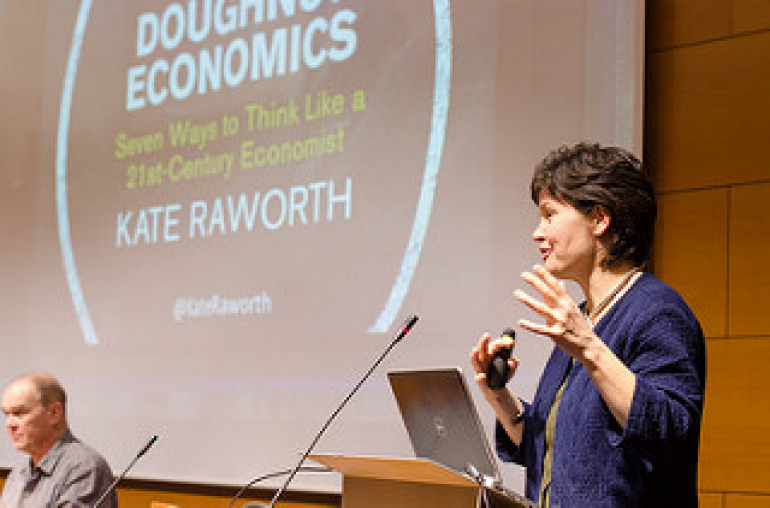 Could the ring doughnut, one of America’s most famous sweet snacks, hold the answer to the problem of transitioning to a sustainable and fair economy? Yes, according to a growing number of English-speaking alter-globalists and environmental activists, whose views are explained in a book published in April 2017 (Doughnut Economics: Seven Ways to Think Like a 21st-Century Economist). Given that almost 200 people attended an event held to discuss the topic in Brussels on 6 March which was jointly organised by the ETUI and the Flemish organisation Arbeid&Milieu, the idea is perhaps not as bizarre as it first sounds.

The doughnut model is the brainchild of Kate Raworth, a self-styled renegade economist who has become a media personality and influential figure in her native UK since the publication of the bestselling book referred to above. She believes that the instantly recognisable outline of a ring doughnut provides the ideal basis for an economic model fit for the 21st century, with the area between the inner and outer perimeters representing the point of equilibrium at which human needs are met but the Earth’s limits are not breached. The inner perimeter is the social foundation which ensures that our fundamental needs are met (health, income, access to food and water, housing, education, etc.), while the outer perimeter is the ecological ceiling beyond which life on Earth is in jeopardy (as a result of pollution, climate change, biodiversity loss, ocean acidification, etc.) (see diagram).

Kate Raworth’s growing reputation means that she now regularly receives invitations from leading multinationals which are interested in learning more about her iconoclastic ideas. The author and University of Oxford lecturer is happy to accept these invitations, since she firmly believes that the transition to an eco-socially responsible economic model will be impossible without the involvement of the corporate world.

Yet, even though Kate Raworth regards the world of business as a potential partner in implementing her model of change, she is well aware that a shift in mindset will be needed, and argues in favour of a production system which is both distributive and regenerative by design.

During her speech, she cited a variety of real-life achievements by citizens’ collectives or companies operating along cooperative lines as proof of the validity of her model, and at several points showed the audience her FairPhone, a type of smartphone which – unlike its much more famous Apple counterpart – can be opened and repaired by the user.

Philippe Lamberts, a Green MEP, voiced his enthusiasm about the doughnut model when asked for his thoughts on Kate Raworth’s speech (‘I feel at home’), but pointed out a number of limits, expressing particular doubts as to the across-the-board applicability of the concept of a circular economy. He used the example of the electronics industry, which produces goods containing metals that could be recycled only if vast amounts of resources were ploughed into the process, thus rendering the whole exercise devoid of environmental benefit, before going on to mention the electric cars on which so many hopes are currently pinned, explaining that global reserves of the metal lithium (a vital component in batteries) would suffice to manufacture only a single generation of electric vehicles if every single combustion vehicle in the world were to be replaced by an electric car tomorrow.

Ian Gough, a professor at the London School of Economics and author of a book – Heat, Greed and Human Need: Climate Change, Capitalism and Sustainable Wellbeing – which has received less media attention than Kate Raworth’s publication but which is no less a breath of fresh air, takes the view that ‘green capitalism’ is not a cure-all, and is sceptical about ‘green growth’ – the dominant strategy proposed as a solution to the climate challenge, which is based on improvements to the ‘eco-efficiency’ of the global productive system. He believes that this approach is biased, since it completely sidelines the moral case and, more specifically, issues of equity. In his opinion, inequalities exacerbate climate problems by fanning the flames of status competition, which is a driving force behind excessive consumption and debt among the most fragile in society.

The term ‘Anthropocene’ is frequently used to describe the impact of human activities on our planet, starting in the early stages of the Industrial Revolution in the late 18th century and continuing through to our own time. During his speech, Ian Gough expressed his belief that it would be more accurate to talk about the ‘Plutocene’, since the world’s richest 10% account for 50% of CO2 emissions. As evidence for this claim, he referred to the fact that an extra 1.6 billion people in the world could have electricity without more greenhouse gas emissions if the 40 million SUVs in the USA were ordinary cars.