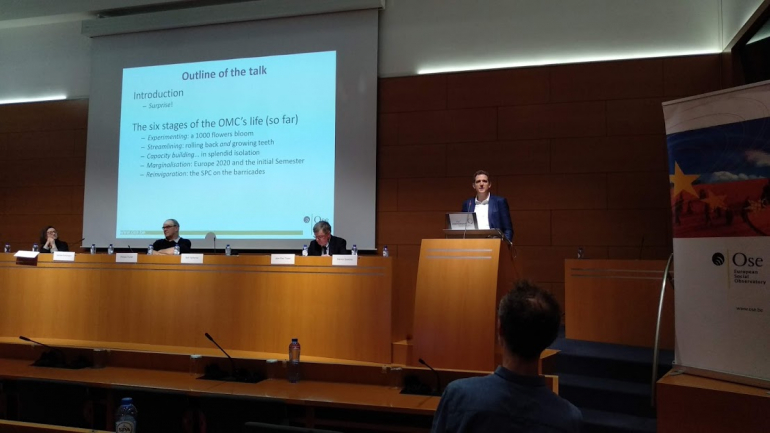 Sacha Garben, Professor of EU law at the College of Europe, then kicked off the first thematic session, which was devoted to the opposition between social and economic integration and the changes that have taken place at the EU level in this respect over the last two decades. In her view, the European Pillar of Social Rights (EPSR) should not be dismissed as entirely useless just because it is not binding. “It is a very important initiative,” she said. “But it does not prevent social deficits.” In the ECJ rulings, social rights clash with economic rights and the right to conduct a business. Garben saw the situation as a “highway of economic rights next to the long and winding road of social policy”. According to her, the biggest problem is that there is a democratic deficit: very important decisions are taken by the judiciary and not by elected politicians. In this respect, we need to develop a normative framework for the role of fundamental rights because they “ultimately serve the purpose of counterbalancing democratic failures”.

Frederic De Wispelaere from HIVA (KU Leuven) talked about the achievements and controversies of 60 years of European social security coordination. He showed figures on the number of people benefitting from the European coordination regulations, which reveal a hidden “European welfare state”. However, the crisis of 2008 has created fears of “welfare tourism” and “social dumping”, and the existing provisions have been called into question despite a lack of quantitative evidence of such practices.

Luc Tholoniat from the Directorate-General for Economic and Financial Affairs (ECFIN) of the European Commission (EC) focused his comments on two critical developments over the last 20 years: enlargement and the economic situation. The doubled free movement of workers has changed the way we perceive social policy, and the economic crisis and the recovery both need to be factored in. “The social agenda is very active, and is not peripheral to the market anymore,” he said, urging caution not to overload it and create false expectations, while also taking care not to overlook opportunities. Herwig Verschueren from the University of Antwerp agreed that the situation is not “frozen”, and according to him the Laval and Viking cases are “old law”. If the ECJ were to treat the same cases now, the rulings would be different. According to Verschueren, leaving such decisions to national democracies would result in them never accepting foreigners into their national social systems. It is not easy to find the right balance.

The second session of the conference was about the implementation of the EPSR. The moderator Bart Vanhercke wanted to know what the panellists thought was currently the top priority of the Pillar and if there were issues which should not be dealt with at this level.

Krzysztof Nowaczek, from the DG EMPL (Employment) Coordination Unit said that the EC needs to continue to deliver on the initiatives presented in the communication for 2021 but it also needs proposals from all other stakeholders. According to Maxime Cerutti, Director of the Social Affairs Department of BusinessEurope, the EU could play a very important role in improving the performance of labour markets and social systems across Europe but at the same time it should not overlook the differences between countries. It is understandable that workers want to focus on working conditions, said Cerutti, but we need to act together and trust each other in order to react to uncertain events such as now with the corona virus. The main priority of BusinessEurope is to improve tripartism at the EU level in the coming year. The employers’ federation has also started joint activities with the ETUC in nine CEE countries to invest in the capacity of the social partners, as such structures are weak there. Giovanni Casale from the ETUC said that for the European trade unions the priority is a strong action plan such as the EPSR which will make Member States move in the same direction, and they welcome the process of consultation with the social partners which the Commission has launched.  It is also crucial that the EPSR supports the ecological transition while making sure to protect workers. Freek Spinnewijn, Director of FEANTSA, the European NGO working on homelessness and housing exclusion, said that while the EC needs to cover all principles, it needs to be particularly ambitious on some. “We need to keep in mind that there are four actors – the Member States, social partners, civil society and the EU institutions,” he said. There was some cause for concern, he found, as the consultation left some open questions: does this mean that the Commission does not have any ideas? He hoped that the action plan would also include the real “nobodies” who should not be left behind.

In the third session of the conference Bart Vanhercke presented his chapter on the open method of coordination (OMC). He took the participants through what he saw as the different stages of this constantly metamorphosing policy instrument and concluded that in the future the role of the OMC will very much depend on the willingness of key national and EU players to use it strategically. Jean-Paul Tricart, former Commission official and currently associate researcher at the ETUI, then examined how the European social dialogue has evolved over the last two decades, arguing that this happened in very uneven and often contradictory ways. Overall, he said, the process had slowly deteriorated, especially during the Barroso Commissions and during the financial crisis of 2009.

Amandine Crespy from the Université Libre de Bruxelles responded to both presentations in her comments. She said that it was the EMU background of both instruments with its prevailing vision of competitiveness that defined the horizon of what is possible and what is not. She also agreed that there was no connection anymore between the European identity and social Europe, and that the European Commission had played quite a strong role in this development. But she questioned why the networks around it, such as the trade unions, were now more hostile against the European Union.

In the last session of this book launch, Slavina Spasova, researcher at the OSE and co-editor of this year’s volume, presented the main messages delivered in the different book chapters dealing with key EU social policy areas. She also provided policy recommendations that drew on the book’s analysis, emphasising the necessity of ensuring appropriate resources, powerful automatic macroeconomic stabilisers and a clear political affirmation of the social OMC’s overall objectives, as well as its relationship to the EPSR.

Isabelle Schömann, Confederal Secretary at the ETUC, expressed her appreciation of the “very robust analysis” which this publication has been providing for 20 years. However, she thought that something should be added to the analysis: the role of the better regulation agenda which has had a big impact on social dialogue and has even been expanded by the new Commission. It is also important, she said, to look at what the Conference on the Future of Europe will add to the debate. She argued that it will be crucial for the EU to accede to the European Convention on Human Rights, and the Social Progress Protocol should be foregrounded. Philippe Pochet concluded by saying that the challenge now is not only to make sense of all these different developments in the short term: in the long term there are big changes taking place such as climate change and deglobalisation. We still do not know what the consequences will be of these new and unprecedented challenges.