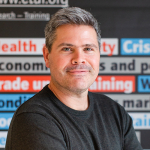 Alain Bloëdt joined the ETUI Communication and Publications Unit in October 2020 in order to strengthen and extend its reputation and the dissemination of publications and training, thanks to his experience at EU level and his extensive network. Graduated in journalism from the University Laval in Québec, Canada, he also holds two masters, one of Contemporary History and one of Eurojournalism. Prior to joining the ETUI, he has worked as a journalist for Agence Europe and Europolitics, as an assistant to two Members of the European Parliament and as a spokesperson and Communication adviser of the European Commission President. He also worked for two European think tanks, the Foundation Robert Schuman and the Foundation for European Progressive Studies (FEPS), where he co-founded the Progressive Post magazine.