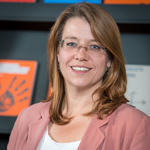 Aline Hoffmann joined the ETUI in October 2012. The theme of European workers’ participation has long marked her academic and trade union career. After completing her BA in political economy at the University of California at Berkeley in 1993, she worked at the Wissenschaftszentrum Berlin (WZB). She then took a Masters degree in European Studies at the University of Cambridge, followed by a PhD from the University of Warwick. In her undergraduate thesis, her Masters thesis and her doctoral research, she explored a wide range of legislative, conceptual, political and practical aspects of employee interest representation from a European comparative perspective. From 2001 until 2012 she was head of the European Works Councils Team at the headquarters of the German metalworkers union IG Metall, working also on related issues of union policy towards central and group works councils as well as supervisory board representation. For 10 years she represented the IG Metall at the Company Policy Committee of what was then the European Metalworkers Federation (EMF). She was the national officer charged with coordinating IG Metall and EMF activity within the central, group and European works councils of the Bosch Group. She was a member of the Supervisory Board at Bosch for 5 years. She is also the coordinator of the European Workers’ Participation Competence Centre (EWPCC).

The EU company law package: how it should be improved to strengthen workers' rights and avoid abuse through cross-border company mobility

The proposed EU company law package, which was published in April 2018 by the European Commission, seeks to encourage cross-border company... Find out more

This timely new publication revisits the Social Scoreboard published by the European Commission (EC) on the 26th of April 2017. The European... Find out more