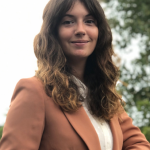 Aude joined the ETUI in October 2020. She has a law degree from the University of Glasgow (Scotland), and the Université d’Auvergne (France). Aude completed her first Masters in Employment Law at the Université d’Auvergne in 2014. On that occasion, she wrote her masters thesis on psychosocial risks by comparing the French, the British, and the European legal systems. Subsequently, she obtained an LL.M degree at the University of Glasgow in 2016 where she conducted a comparative research study on Collective bargaining in France, the United Kingdom and the EU. Then, from November 2015 to July 2016, Aude was a visiting scholar at the Max Planck Institute in European Legal History in Frankfurt (Germany). There, she worked on the workers’ mobilisation on Occupational Safety and Health (OSH) in the 1970s and the lessons which could be drawn from it to analyse present challenges. After that, Aude specialised in OSH with a socio-legal and comparative approach at the University of Glasgow. There, she gained a PhD at the Law School in 2020 after completing a thesis on ways to improve the legal framework governing OSH in EU. During her PhD, she was an intern at the ETUI for two months in 2018, researching the extent of the scope to develop a litigation strategy before the CJEU in the OHS field.