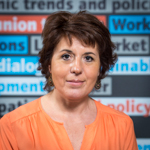 Carmen has a M.A. in Translation Studies from the Institut libre Marie Haps in Brussels. At the same institute, she also took a course in Portuguese. She initially worked as a teacher of French and Spanish at the Berlitz school in Brussels and as a freelance translator for the European Commission. In 1986, following the accession of Spain and Portugal to the EEC, she was recruited by the ETUI.