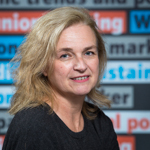 Géraldine has a master’s degree in journalism and communication from the Université libre de Bruxelles (ULB), and a degree in plastic, visual and spatial arts from the Ecole supérieure des Arts de l'image "Le 75", in Brussels. Communication (spoken, written and visual) is the guiding thread in her career: as a photographer, she has reported from overseas (Hungary 1981, China 1985, Zimbabwe 1995); as a journalist, she was responsible for the radio news on Radio Campus (ULB), but she also translated for press magazines and trade union publications, and was coordinator of communication and cultural event organisation at the Fnac. She has worked for the Institute (ETUI) since 1999.