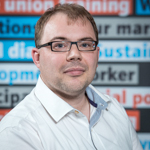 This policy brief shows that only a small minority of Deliveroo riders in Belgium, who are predominantly male, young and students, hold... Find out more

Collective bargaining in Europe: towards an endgame. Volume I, II, III and IV

This collection of four volumes charts the development of collective bargaining since the year 2000 in the 28 EU Member States. These four... Find out more

This report details shifts in trade union membership and density in 32 European countries since 2000, with a particular focus on the age... Find out more