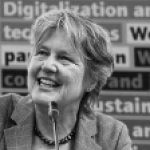 Marian Schaapman is Head of the Unit Health & Safety and Working Conditions of the Research Department of the ETUI since October 2017. She holds a degree in Law and Public Administration of the University of Amsterdam, was the director of the Dutch Trade Union Confederation FNV’s Occupational Diseases Office (Bureau Beroepsziekten) from 2009 until 2017. This office, set up in 2000, is exclusively dedicated to the issue of occupational diseases. It evolved from an office providing legal help to individual victims of occupational diseases to get financial compensation, to a key player in the field of compensation and prevention of occupational diseases in the Netherlands, both with regards national policymaking as well as influencing legal developments (litigation strategy and legal theory) and as a source for scientific analysis and knowledge. In her FNV period, Marian was already connected with ETUI, both as a member of its Advisory Board, as well as participant in research projects and conferences on the prevention and compensation of occupational diseases. Marian also acquired broad academic experience as a labor law and policy researcher at the University of Amsterdam’s Hugo Sinzheimer Institute from 1994 until 2012. She conducted research in a wide range of areas from working conditions and occupational diseases to labor relations and gender equality. During this period she also was a correspondent for the European Industrial Relations Observatory (EIRO).