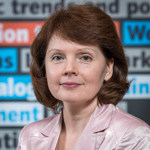 Olga Barth, who has an academic background in general sociology and practical accounting, joined the ETUI in December 2009. Previously she had worked as an Administrative Manager at the Institute for Comparative Labour Studies in Moscow and, since 1997, had been working for the International Trade Union Confederation (former ICFTU) first in Moscow and, since 2001, in Brussels, managing Pan-European Regional Council funds and projects.