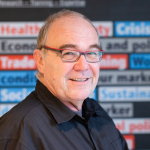 Philippe Pochet is General Director of the European Trade Union Institute (ETUI), Professor at the Université catholique de Louvain (UCL) and associated researcher at the Interuniversity Research Centre on Globalization and Work (CRIMT, Montreal). Prior to becoming Director of the ETUI in 2008, he was Director of the Observatoire social européen (OSE) for 16 years. He is interested at and has published extensively books and articles on European social and economic policies, European social dialogue and new forms of governance. He is now working on the issues of impact of climate change and digitalisation on jobs and seeking how to combine the analysis of the big trends. Previously he had other temporary positions, such as invited Professor at the College of Bruges and invited scholar at the Faculté Universitaire Saint-Louis (FUSL), adjunct professor and visiting scholar at Griffith University (Brisbane).

He was visiting scholar at Berkeley University, at Montréal University, at the Max-Planck-Institut für Gesellschaftsforschung (Cologne), and at the Centre for European Studies, Harvard University, Cambridge (USA). In 2005, he was awarded an EU Fulbright-in-Residence grant at the University of Wisconsin-Madison (USA). Philippe is also the co-editor of Transfer, the European Review of Labour and Research Quarterly of the ETUI Research Department.

This paper explores the EU recovery strategy with a specific focus on its potentially transformative aspects vis-à-vis European integration and on its implications for the social dimension of the EU’s socio-economic governance. It aims, in particular, to provide a reflection on whether the established measures put forward sufficient safeguards... Find out more

From just transition to a new concept of the welfare state

Editorial Addressing the climate emergency is coming to be recognised as a top policy priority by more and more policy-makers. In order to rein human activity back within planetary limits our entire production and consumption model needs a fundamental, paradigmatic change. The welfare state that emerged in the context of a fossil fuel-based... Find out more

Covid-19 and the world of work in Europe

Editorial David Natali This issue of Transfer addresses some of the main analytical and substantive questions stemming from the pandemic that first hit Europe in February 2020. The magnitude of the crisis, in terms of both its impact on health and well-being, and its consequences for economic prospects, is enormous. The massive spread of the virus... Find out more

Editorial Vera Šćepanović, Philippe Pochet The past decade has not been easy for the European trade union movement, and the still ongoing COVID-19 crisis has only added urgency to some of the longstanding questions: how to cope with technological transformations and climate change, with ageing populations and generational fragmentation of the work... Find out more