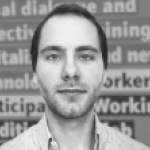 Pierre Bérastégui holds a Bachelor Degree in Psychological Sciences (2012 – ULiège), a Master Degree in Industrial and Organizational Psychology (2014 – ULiège) and recently completed his PhD in Cognitive Ergonomics (2019 – ULiège). His thesis focused on the impact of the European Working Time Directive on emergency physicians’ well-being and patient safety. After his PhD, he pursued his research at the Cognitive Ergonomics Laboratory (LECIT) until he joined the ETUI in January 2020. Pierre Bérastégui is working as a researcher in the Health and Safety Department. He is also a member of the Tools and Awareness Raising Advisory Group (TARAG).

Exposure to psychosocial risk factors in the gig economy

The ‘gig economy’ refers to a market system in which companies or individual requesters hire workers to perform short assignments. These... Find out more