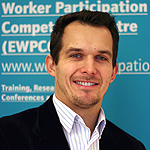 Romuald Jagodziński comes from Poland. He holds a Master's Degree in International Relations (European Studies) from the legal faculty of University of Poznan (Poland) and Europa-Kolleg in Hamburg (Germany). In 2010 he completed a Summer School at the London School of Economics. Romuald carried out several traineeships, including two at the ETUI where he was a trainee/guest researcher in the field of worker participation in 2002 and 2004. Before joining the ETUI in January 2006, he worked in the Human Resources Department of Volkswagen in Poznan, as a freelance translator/interpreter and tour guide. He is also member of the WPEurope network - Workers participation at board level in the SE - an element of good corporate governance.

Are European Works Councils ready for Brexit? An inside look

Can anybody hear us?

This publication, that consists of unique survey data, gives an insight into the functioning of European Works councils (EWC) from the... Find out more

The right and duty of European Works Councils to report back to the workforce: broad uptake, little specificity

This policy brief examines if and how the reformulated obligation in the Recast European Works Council Directive to report back found its... Find out more

Variations on a theme? The implementation of the EWC Recast Directive

Since 1994, the EU has established mechanisms for information and consultation procedures for workers in transnational companies (European... Find out more