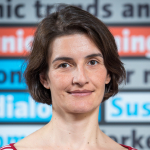 Sotiria joined the ETUI as a Senior Researcher in November 2010 and in 2018 she became Head of Unit II, European economic, employment and social policies. She has been studying macroeconomic policies and the economic governance in the EU, in particular the effects of the crisis responses and fiscal austerity on macroeconomic and labour market performance and on labour market and social policies. She has been regurlarly acting as an external expert for the European Economic and Social Committee (EESC). She is a member of the Advisory Committee of the Social policies unit of the Eurofound in Dublin.

Sotiria earned her PhD in European Political Economy from the London School of Economics with a thesis on the interactions of macroeconomic policies and labour market institutions in shaping unemployment in Europe. Prior to joining the ETUI, she worked as economic policy analyst at the European Policy Centre in Brussels, a researcher for the Knowledge Economy programme of the Work Foundation in London and as an Associate Fellow for the European programme of Chatham House. Between 2006 and 2008, she was a research fellow at Trinity College Dublin, working on a project on the political economy of globalisation, de-industrialisation and the rise of the service sector. She spent several years teaching Economics of the EU and public policy at the LSE, King's College London, Birkbeck College and the University of Athens. Sotiria is the proud mother of two children.

→ www.benchmarking2020.eu A virus is haunting Europe. And it could strike again. This year’s 20th anniversary issue of our flagship publication Benchmarking Working Europe brings to a growing audience of trade unionists, industrial relations specialists and policymakers a simple warning: beside SARS-CoV-2, the virus that has caused the Covid-19... Find out more

This Working Paper addresses the issue of ‘fair’ wage growth over the last few decades. It assesses whether growth in real compensation is systematically associated with labour productivity growth and, if so, whether the two have ‘decoupled’ in recent years. The paper examines country-specific evidence from 25 Member States and finds evidence for a... Find out more

Labour market policies in the era of pervasive austerity: a European perspective

This book investigates the changing patterns of labour market and unemployment policies in EU member states during the period since fiscal austerity took hold in 2010 during the deepest postwar recession in Europe. Looking at the big European picture, do we see a convergence or a divergence in labour market and unemployment policy trends and... Find out more

This working paper examines the impact of fiscal austerity on EU labour market policies. Using a case study approach, it examines: the extent of change in unemployment benefit levels and policies; the effect of this on groups of workers; and whether the logic of activation policies has shifted. Overall, the broad direction of policy has not altered... Find out more