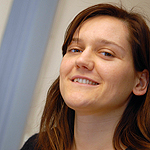 Vera Glassner, who holds a PhD in industrial sociology from the University of Vienna, worked at the ETUI from November 2007 until February 2012 as researcher in the area of industrial relations. Before joining the ETUI she held the position of research assistant at the Institute of Industrial Sociology, University of Vienna. Vera Glassner has conducted comparative studies on labour relations and social partner organisation for the European Foundation for the Improvement of Living and Working Conditions. She has also carried out studies for various organisations including the International Labour Organization, the Hans Böckler Foundation, the Otto Brenner Foundation, the European Metalworkers’ Federation, the European Mine, Chemical and Energy Workers’ Federation, the European Trade Union Confederation, as well as other national and European unions. In her research on the Europeanisation of industrial relations she also cooperates with several academic research institutions.

Transfer stimulates dialogue between the European trade union movement and the academic and research community. It contributes research... Find out more

In the run-up to European Monetary Union (EMU) trade unions across Europe began to coordinate their bargaining policies transnationally... Find out more

Against the background of governments’ consolidation strategies, ETUI researcher Vera Glassner provides an overview of recent developments... Find out more