The future of democracy in times of planetary crises 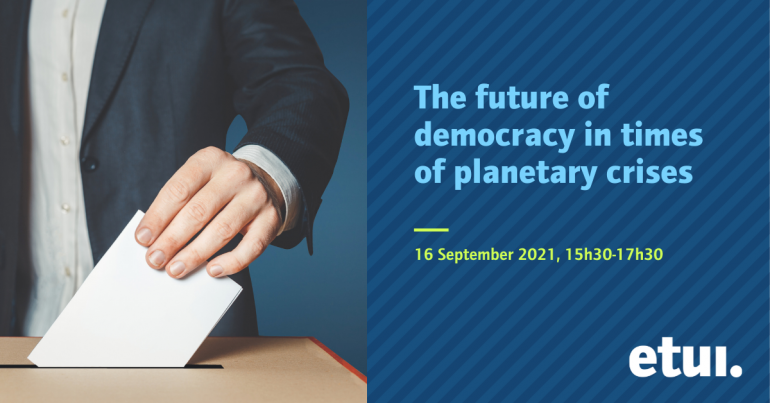 Briefing: Recent floods in Western Europe and extreme heat and fires in Canada, the US and Southern Europe – crises which are more than ever linked to human-induced climate change – have been the latest wake-up call to step up our efforts to halt global warming. Ironically, the start of the floods coincided with the unveiling of the European Commission’s package of proposals aiming to make the EU ‘fit for 55’ ( reducing net emissions by at least 55% by 2030 compared to 1990) and delivering the necessary transformations of economy, society, and industry. However, there are doubts as to what extent this necessary transition will happen in a socially just way, and whether the Western democratic model will be sufficient to achieve this.

We will re-start our ETUI Monthly forum series with a debate on the crisis of representative democracy and new international experiments such as citizens’ panels and ombudspersons for future generations. By bringing larger participation of citizens into policymaking and building the long-term interests of future generations into the democratic institutions, these experiments are meant to make our democracies more resilient, more efficient and more socially just.

This renewal of democracy is also of utmost importance for trade unions as efforts for more democracy at the workplace could learn from this ‘deliberative wave’. How can the current system of social dialogue and collective bargaining be improved and how can unions have more input into broader areas of our economic development using these reforms of our democratic institutions?

For this debate we have invited renowned academic Hélène Landemore from Yale University who argues that climate issues are deeply connected to social justice locally and should be tackled at different levels and with structural citizens’ participation. This could also be an answer to another characteristic problem of professional politics - the lack of long-term thinking – which is fundamental in the case of climate change policy. Roman Krznaric who recently published the book ‘The Good Ancestor: How to Think Long Term in a Short Term World’ will connect the participative democracy proposals with the need of more long-term thinking in politics, and how to make sure we incorporate the future generations in our decision-making processes. And last but not least, Ludovic Voet, ETUC Confederal secretary responsible for just transition, will tell us more about the trade unions role and position in this debate.