After the euro and enlargement: social pacts in the EU 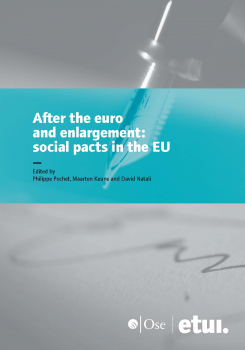 The participation of social partners in the management of socio-economic policies has been a stable feature of European politics in recent decades, having been defined as one of the key aspects of the European Social Model. Yet the role of concertation has changed during different cycles. This book aims to shed light on the most recent wave of social pacts in the last decade in western and eastern EU countries. In the context of recent socio-economic and political challenges (globalisation, changing economic context, labour market transformation, and the full implementation of EMU), 11 country chapters summarise the recent evolution of social pacts across the Eurozone and in New EU member states. These country chapters, alongside a number of more analytical contributions, show that social pacts of various kinds have contributed to employment, wage and welfare reforms over the last two decades, thereby demonstrating that these agreements are changing institutions able to be used by policymakers and social partners in their efforts to deal effectively with evolving socio-economic and political challenges. Yet such institutions are, by nature, extremely fragile. Though the complex interplay of constraints, actors’ strategies and institutions can, in some cases, lead to lengthy periods of social collaboration, this very complexity still reduces the scope for full stabilisation.