EU social and employment policy under the Europe 2020 strategy 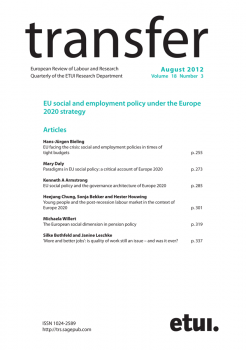 ‘Social Europe’, one of the core elements of Jacques Delors’ social democratic heritage, promised to lend the European political project greater legitimacy. Thanks to his efforts, the Treaty of Amsterdam (1997) contributed decisively to institutionalizing social and employment policies in the European political system. The objectives of promoting ‘a high level of employment’ and better coordinating social policies and social protection in accordance with the basic rules – spelled out in the European Social Charter (1961) and the Community Charter of the Fundamental Social Rights of Workers (1989) – became new elements of the European Community’s legal basis.