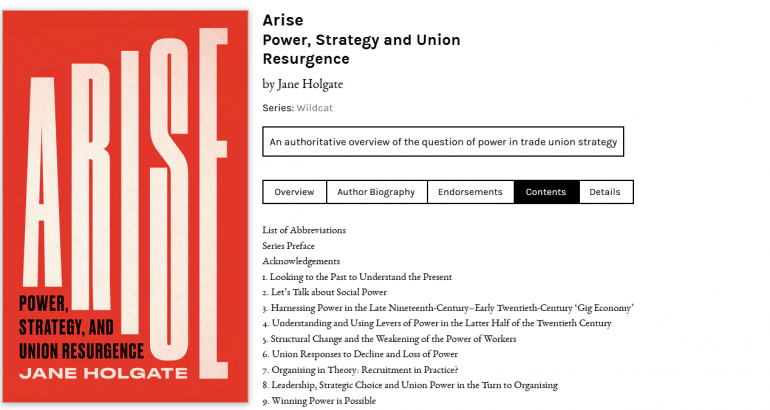 There have been thousands of research papers and books from both scholars and practitioners on the questions of union decline, union organising, and efforts to revitalise the union movement, yet we are still struggling to adopt an adequate response to the decline in union membership and power.

What should unions be organising for if they wish to remain relevant over the next couple of decades? Is there an alternative vision of the labour movement which is about building the capacity of workers to increase their collective control over the conditions and rewards for their labour? Is there a renewed role for trade unions to reconnect with the communities in which their members live?

It’s argued that these questions are unanswerable without a proper understanding of power and its different forms.

The loss of union power is not an inevitable consequence of globalisation and the neoliberal agenda. That’s not to down play the significant challenges of neoliberalism, financialisation and restrictive labour law, but workers have the potential for power, even if they don’t yet realise it, because capital and employers depend upon them.

Yet unions have not adapted as well as they might to the adverse changing political and economic climate. Too often the strategies deployed today are formed out of past conflicts by leaders and organisations that have cultural memory and habits carried over from previous struggles in different times. That they might have been successful in the past, and led to great wins being achieved, doesn’t mean those strategies are always appropriate to the changed industrial climate of today.

Because the employment relationship is essentially an imbalance of power, then this is where the focus for unions needs to be.

So, what power resources are available to unions?

The most obvious is associational power where workers increase their power by combining with their work colleagues to take action to change the exploitative circumstances in which they find themselves. This is the heart of what trade unions are about––it’s the capacity of union members and their leaders to act collectively. Thus we need to recruit and organise to increase union membership.

Following this, structural or industrial power arises from the position of workers in the economic system, it frames their potential ability to bargain in the labour market and workplace. Structural power can arise as a result of a particular body of knowledge, skill or understanding being scarce and in demand in the labour market––when this is the case workers and their unions have leverage to claim higher wages for their labour. Here we need to be sure that we undertake structure tests prior to industrial action to be sure that we can turn out significant majorities for industrial action.

Increasingly unions have utilised Institutional power especially when the two former sources of power are weak –– this the capacity to hold employers to account through laws and regulations at transnational, national and local levels. Can we be inventive in using legislation to increase leverage with employers and government?

Similarly, political power has been a useful lever when unions have strong links with political parties that are sympathetic to the rights of workers. It is here that moral frames have been used by unions over the years, such as ‘the right to work’, the demand for a ‘living wage’ etc. This moral power has played a role in garnering support for trade unions, both within their membership but also from external players.  How strong are our links with our political allies and can we exploit the weaknesses of our political opponents?

The ways we think and talk about a subject has an influence on, and reflects, the ways we act in relation to that subject. Unions need to be able to act to take control of a narrative that frames their social justice claims in a way that resonates with wider circles of people, and we can think of this as discursive power. We need to sharpen our framing and our messaging so that we connect with the wider public as well as our members if we want to build allies.

Finally, and importantly, there are power relations within unions that affect strategies for growth and institutional learning. The power relations in unions are not only gendered though, they’re also racialized. The lack of diversity in leadership positions within unions can work against transformational change, because it limits the capacity for strategic thinking. Without the ability to draw upon the lived experiences of a greater diversity group of leaders, the tendency is for unions to adopt familiar repertoires of action, even when these are no-longer effective.  Too often, knowledge about strategy, tactics and power is drawn from too narrow a pool of (similar) leaders, which may lead to replication of ineffective strategies and tactics.

One of the great strengths of a number of the new independent unions in the UK is that their leaders are from many diverse cultures and backgrounds. It’s the very different lived experience of their membership, from which their leadership is drawn, and the lack of adherence to particular forms of action that has taken employers by surprise. These unions, as new organisations, are less constrained by ‘traditional’ industrial action, and are able to draw upon the diverse culture of their membership to innovate

As Saul Alinsky, political theorist of community organising, said in his book, Rules for Radicals, whenever possible, go outside the expertise of your adversary by finding ways to increase insecurity, anxiety, and uncertainty, because power is not only what you have, but what the enemy thinks you have, and if you can surprise them by taking unexpected actions, then you start to change the power dynamic.

This not only requires a diverse and strategic leadership, it also requires a learning, and reflexive culture within an organisation. This book argues that a re-focusing on power is what is now required in the organising debate.

The blog Arise, Power, Strategy and Union Resurgence is a summation of the book of the same name written by scholar and labour activist Professor Jane Holgate from the University of Leeds in the UK.  It argues that in order to organise for growth and win, unions need to rethink and understand the power resources and strategies at their disposal. Find out more here: Holgate, J. 2021. Arise. Power, strategy and union resurgence. London: Pluto.