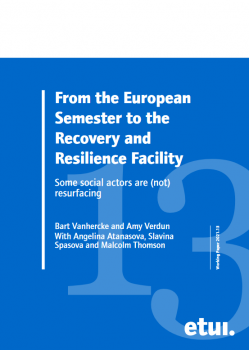 In response to the Covid-19 pandemic, major financial support has been pledged to Member States. This funding draws on the EU’s multiannual financial framework and the ‘NextGenerationEU’ with, at its core, the temporary ‘Recovery and Resilience Facility’ (RRF). While some reporting templates have been newly invented, others are linked to the European Semester.

This report examines how and why the Semester became part of the governance of the RRF. We also ask to what extent this new set-up has changed the power balance among key EU actors (for example, financial and economic actors versus institutional social affairs actors)? Drawing on extensive document analysis and 32 semi-structured elite interviews, the findings suggest that initially, due to the crisis (and desire for fast action), there was a serious risk that EU institutional social actors were losing the prominence they had previously earned. They gradually reclaimed their position as the immediacy of the crisis subsided and a longer-term focus emerged. EU civil servants also engaged with social partners on both sides of industry, even though it is questionable whether this consultation has been really meaningful.

EU civil society organisations (CSOs) have been largely sidelined in the RRF process; and likewise in most Member States, consultation with domestic stakeholders (both social partners and CSOs) has remained insufficient by any standard. The European Parliament was reasonably successful in securing its substantive impact during the RRF negotiations. But it has since failed to insert itself into the approval and assessment procedures applicable to the EU’s recovery programme.

From the European Semester to the Recovery and Resilience Facility_Some social actors are not resurfacing_2021.pdf

Uniquement disponible en anglais Policy recommendations The Recovery and Resilience Facility (RRF), which makes up the bulk of the ‘Next Generation EU’ plan, with 672.5 billion euros (€) in loans and grants (out of a total of €750 billion), has given new momentum to policy and political coordination in the EU. As embedded in the European Semester... Lire plus