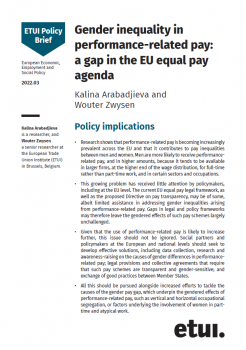 Gender pay inequalities have been high on the EU agenda in recent years, and even more so in light of the Covid-19 pandemic. The EU gender pay gap remains at a significant 14.1 per cent, having narrowed by less than two percentage points over the past decade, as shown by Eurostat data. Closing this gap is one of the central aims of the EU Gender Equality Strategy 2020–2025 (European Commission 2020). One major initiative in this regard is the European Commission proposal for a Directive aimed at improving the effectiveness of the EU equal pay legal framework through more transparency and better enforcement. It is currently making its way through the legislative procedure (European Commission 2021).

Performance-related pay, as a factor contributing to the gender pay gap, has received little specific attention at the EU level. Recent research shows that such pay schemes are increasingly prevalent across the EU and that they contribute to pay inequalities, including inequalities between men and women (Zwysen 2021). This growing issue seems to have escaped the attention of EU policymakers so far, with no explicit mention in either the Gender Equality Strategy 2020–2025 nor the EU Action Plan 2017–2019 on Tackling the Gender Pay Gap (European Commission 2017). These focus on some of the issues underlying the disparate effects of performance-related pay, such as horizontal and vertical occupational segregation, but without recognising the ways in which the increasing prevalence of performance-related pay could exacerbate gender inequalities that are linked to these factors.

This policy brief sketches, first, how the growth of performance-related pay schemes can contribute to the gender pay gap. It then discusses the extent to which the current EU equal pay framework and proposed Directive on pay transparency could be applied to address some of the arising issues. It argues that many of the factors underlying the disparate effects of performance-related pay on men and women fall beyond the scope of legislative frameworks, and are not identified in policy agendas, either. More attention should be paid to this topic at the EU and national levels, and appropriate solutions should be developed.

Performance-related pay links wages to workers’ individual performance, or that of their team or the firm at which they work. These variable pay components can be used to incentivise effort, but they also allow for more flexibility and can be the subject of bargaining for a more attractive wage package, leading to more differentiation between workers (Zwysen 2021).

While performance-related pay could in principle break down existing inequalities in pay systems and improve the gender pay gap, it generally makes such gaps worse, even within firms (Fabling et al. 2012). Estimates range from performance-related pay making a relatively small contribution to the gender pay gap (Manning and Saidi 2010) to a much more substantial negative effect, with gender gaps in variable pay that are substantially higher than those in base pay (de la Rica et al. 2015; Sockin and Sockin 2021).

This is important in Europe, as the use of performance-related pay increased from affecting less than one-fifth of workers in 2000 to around one-third in 2015 (Zwysen 2021). As performance-related pay became more prevalent, it also became less equally divided between men and women (Figure 1 and Figure 2). The gender gap grew mainly in relation to team-based or company-based premia, which are more closely related to profit-sharing and may reflect women’s lower bargaining power, on average (Card et al. 2016). 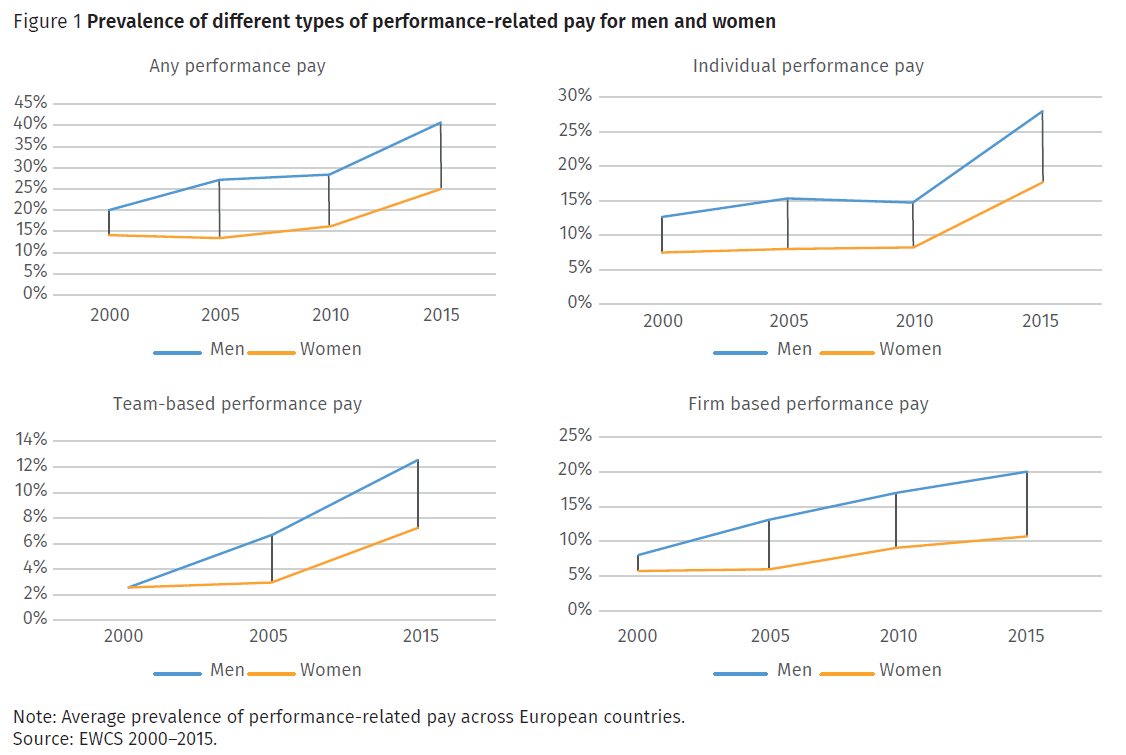 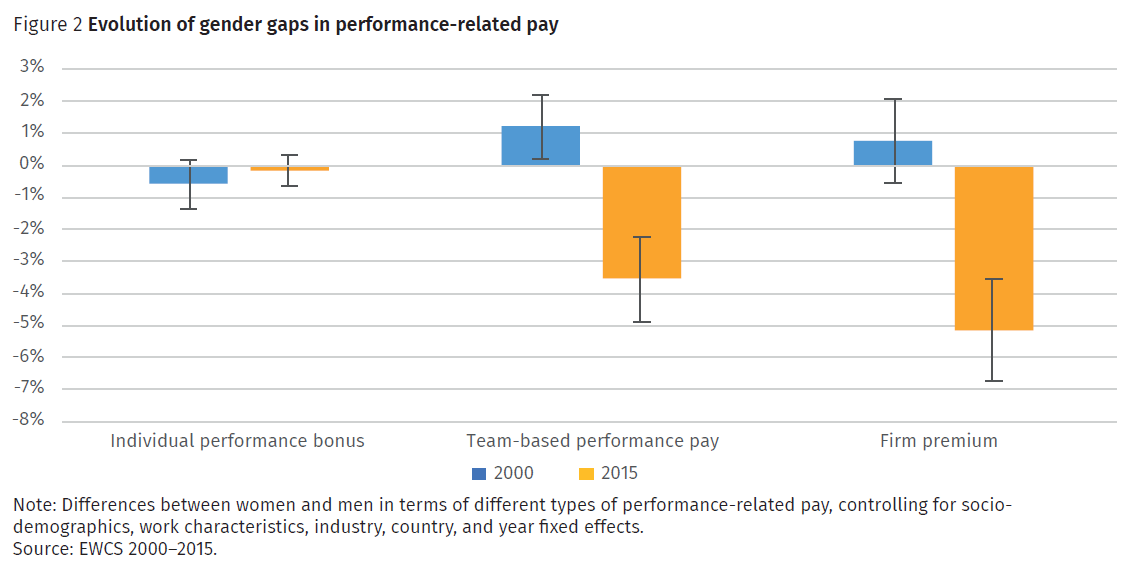 Women not only receive performance-related pay less often, but when they do, they benefit from it less in terms of earnings. The premia for those receiving performance-related pay at team or company-level are really only available for men, and are four times or more higher than what women receive (Fabling et al. 2012; de la Rica et al. 2015). Figure 3 shows that these gendered returns to performance-related pay contribute to women’s disadvantages in obtaining the highest-paid positions; the returns are below those of men from the 70th percentile of income onwards. 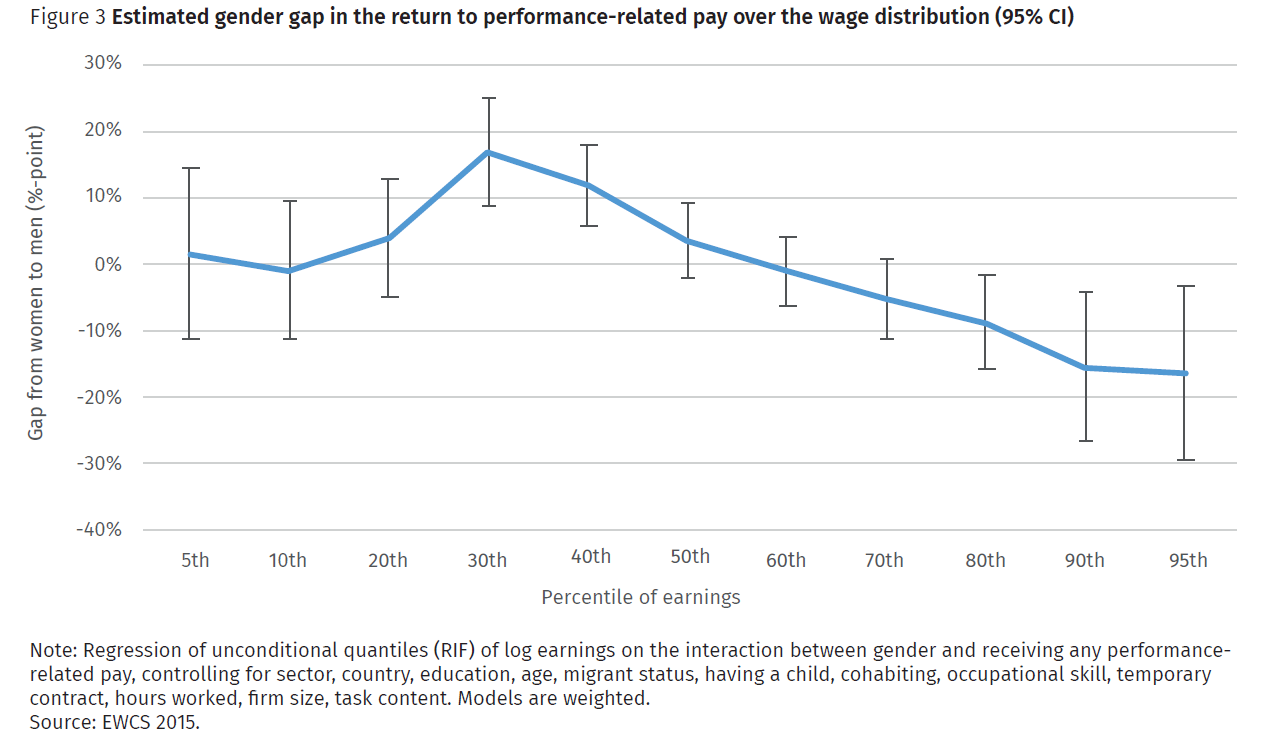 There are several possible reasons for the inequalities described above. Women may not choose to work as often as men in the more competitive jobs, where pay is higher and these systems are used. They may also be evaluated less positively when doing this work. However, while there is some indication of selection playing a role, most studies have not found that women avoid these jobs (Manning and Saidi 2010; de la Rica et al. 2015). A more likely explanation is that these performance-related pay systems are more open to managerial discretion, especially when performance is difficult to measure, and can thereby entrench stereotypes. They are further given as part of a reward package and mainly go to those workers already earning more: those on standard contracts and high-skill occupations, the higher educated, and men (Zwysen 2021).

The current EU legal framework on equal pay could be of some, albeit limited, assistance in addressing gender differences in remuneration arising from performance-related pay. Article 4 of the Gender Equality Directive 2006/54/EC prohibits direct and indirect discrimination on grounds of sex with regard to all aspects of remuneration – that is, including performance-related pay – for the same work or work to which equal value is attributed. Because performance-related pay schemes generally do not place certain workers at a (dis)advantage merely because of their sex, they are not directly discriminatory, but could constitute indirect discrimination. According to the Directive, this occurs ‘where an apparently neutral provision, criterion or practice would put persons of one sex at a particular disadvantage compared with persons of the other sex, unless that provision, criterion or practice is objectively justified by a legitimate aim, and the means of achieving that aim are appropriate and necessary’ (Article 3(1)(b)). The concept relates to disparate impact as between men and women, addressing certain aspects of structural gender inequality rather than overt discrimination (Mulder 2021).

This provision could come into consideration where a performance-related pay scheme ‘works to the disadvantage of a much higher percentage of women than men’ (C-332/98 Kachelmann). This includes a situation in which ‘a considerably smaller percentage of women than men’ are able to meet requirements that entitle them to a particular element of pay (Case 96/80 Jenkins). This could be the case where a scheme applied by an employer benefits fewer women than men, because it does not apply to part-time workers doing the same work or work of equal value, or rewards male-dominated as opposed to female-dominated jobs involving work of equal value. For example, there are several CJEU rulings that consider that differences in pay between full-time and part-time workers could constitute indirect pay discrimination (for example, Case 96/80 Jenkins, Case 170/84 Bilka-Kaufhaus). The prohibition of pay discrimination will not, however, apply where fewer women than men receive performance-related pay because it is awarded to those in higher positions, as the groups compared do not carry out work of equal value. It may also not be relevant to differences that arise because performance-related pay is more likely to be awarded in larger firms, or certain sectors, unless the differences in pay are attributable to a ‘single source’, such as a holding company or conglomerate (C-320/oo Lawrence, see also Advocate General opinion).

Furthermore, the concept of indirect discrimination has been subject to some controversy and can be difficult to apply in practice, both in terms of establishing the appropriate comparator groups and the presence of particular disadvantage (Mulder 2021; see C-167/97 Seymour-Smith). The concept is generally poorly understood at national level, and there is little national case law (Mulder 2021). In addition, it is open to employers to argue that a scheme in question is ‘objectively justified’. Business needs and goals can constitute legitimate aims in this regard, although an objective justification will not be present if less discriminatory measures to achieve these aims are available. Given some of these hurdles to a successful claim, workers may think twice before challenging performance-related pay schemes on the basis of indirect pay discrimination provisions, although this could be a worthwhile subject for strategic litigation. In any event, these provisions are a limited tool that does not offer a systematic approach to addressing the gendered aspects of performance-related pay.

Aspects of the proposed Directive on pay transparency could help to some extent to uncover gendered effects of performance-related pay. The proposal contains obligations on employers with at least 250 workers to report on pay gaps in the organisation, the proportion of female and male workers receiving complementary or variable components, and the gender pay gap between categories of workers performing work of equal value, broken down by basic salary and complementary or variable components (Article 8(1)), although this does not separate performance-related pay from other variable components. There is also a requirement to conduct a joint pay assessment where pay reports reveal a gender gap of more than 5 per cent, which, depending on the detail of the inquiry, may help to identify disparate impacts of performance-related pay on men and women.

As these obligations apply only to large employers, however, they leave out about two-thirds of the EU workforce and 99 per cent of all enterprises (Eurostat 2021). Interestingly, a US study shows that two policy measures that did have an impact on reducing the gender pay gap in base pay – namely salary history bans (also included in the proposed Directive) and pay transparency laws – did not put a dent in the gender pay gaps in variable pay (Sockin and Sockin 2021). The reason for this is that comparison is more difficult, because there is more variation between people and firms, which makes it harder to identify actual pay gaps or discrimination.

Of course, all of this is in addition to strengthening efforts towards eliminating other causes of the gender pay gap that underpin the gendered effects of performance-related pay, such as vertical and horizontal labour market segregation, and the engagement of women in atypical forms of work to accommodate the fact that they bear a greater share of care responsibilities than men. These issues continue to strongly affect women’s careers and their economic position, and must be tackled by a comprehensive set of measures that address the various dimensions of long-standing structural disadvantages affecting women.

Gender inequality in performance-related pay. A gap in the EU equal pay agenda_2022.pdf

Uniquement disponible en anglais This paper shows that the use of performance pay schemes has risen substantially across Europe from fewer than one-fifth in 2000 up to onethird in 2015, using data from the European Working Conditions Survey and the Structure of Earnings Survey enriched with external contextual data. This increase has been partly... Lire plus