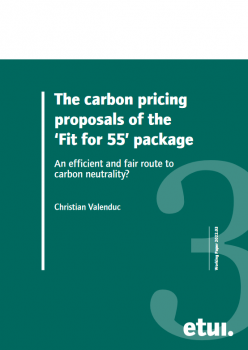 The European Green Deal sets out very ambitious goals for the EU. Carbon neutrality should be reached in 2050. The intermediate goal is a reduction in CO2 emissions of 55 per cent by 2030 compared with the 2005 level. In July 2021, the European Commission delivered the ‘Fit for 55’ package, which contains policy proposals for achieving the ambitious goals of the European Green Deal. The package includes proposals for carbon pricing with the extension of the Emission Trading System, a revision of the Energy Taxation Directive and a Carbon Border Adjustment Mechanism. This working paper will not discuss the whole package, but just its carbon pricing component and the key issues for implementing carbon taxation. While there is a broad consensus among economists about the merits of carbon pricing, there seems to be at least a significant political reluctance to take that route. And while economists widely consider carbon pricing to be superior to other instruments, political choices and implementation appear to favour other instruments, which might include environmental tax incentives and norms and standards.

The ‘Fit for 55’ package has been issued: will the same obstacles prevent its implementation? Or does the package include approaches that will allow countries to overcome them?

This working paper is organised as follows: Section 1 start with a brief presentation of the carbon pricing components of the ‘Fit for 55’ package. These include the extension of the Emission Trading Scheme (ETS); the revision of the Energy Taxation Directive (ETD) and the Carbon Border Adjustment Mechanism (CBAM). Section 2 discusses the contrast between the economic merits and the political acceptance of carbon pricing. Section 3 examines the distributional issues. Our view is that the debate is truncated and misleading when it sticks to the regressivity of carbon taxation. The issue is not whether we should introduce carbon pricing or not, bearing in mind the regressivity, but rather what instruments achieve the best combination of fairness and effectiveness among the ways of delivering a reduction in emissions. Because of the revenue it procures, carbon pricing appears to offer a win–win solution. Section 4 discusses the competitiveness issue and the Carbon Border Adjustment Mechanism proposal.

The carbon pricing proposals of the Fit for 55 package-An efficient and fair route to carbon neutrality_2022.pdf