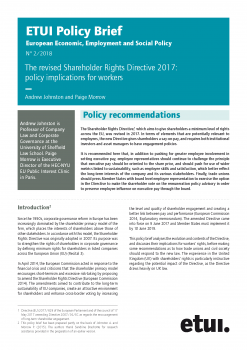 The 2017 revised Shareholder Rights Directive gives shareholders a say on executive pay and requires institutional investors to improve shareholder engagement. The directive is thus designed to provide a counterweight to the increasingly dominant ‘shareholder’ model of corporate governance which has put the interests of firms’ shareholders ahead of other stakeholders, including their workers.  Drawing on the experience of the UK, Europe’s leading exponent of the shareholder model whose experience heavily influenced the Commission’s thinking, this brief analyses the workings of the directive, discusses its implications for worker’s rights and suggests how trade unions should respond.

A frequent criticism of institutional investors, such as mutual and pension funds, is their passivity in influencing the companies they invest in despite the power of exit they hold over them. This has been blamed for short-termism, undermining the trust of workers and fueling excessive executive pay. The directive tries to address these problems by increasing transparency and engagement, and requiring investors to show how their portfolios conform to their long-term investment strategies. Although the directive sets no cap on executive pay it provides shareholders with more control over company policies that include pay. The brief critically examines the effectiveness of these policies, arguing that these do not go far enough and may even be unworkable. The advice for trade unions is to continue pushing on issues such as boardroom pay, particularly the notion that it should be set according to the firm’s share price.