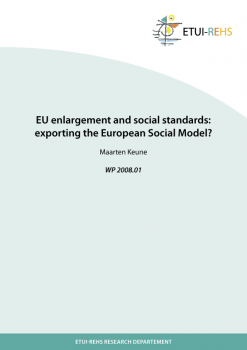 In this paper the extent to which the EU is actively disseminating a social model is considered, through the lens of EU enlargement and accession. To what extent or in what ways has enlargement served as a vehicle for the spreading of EU social standards? The paper examines the social effects of the transposition and implementation of the acquis communautaire, taking account of the (hard and soft) social elements of the acquis as well as some of its economic elements. To this effect, it considers:

· the concept of the European social model and how it finds its expression in EU regulations and practices;

· the weight given to social considerations in the accession procedure;

· the impact of the social acquis on labour markets and welfare state regulations and policies in the EU-10;

· the social implications of some of the economic elements of the acquis, in particular those relating to the Single Market and European Monetary Union.