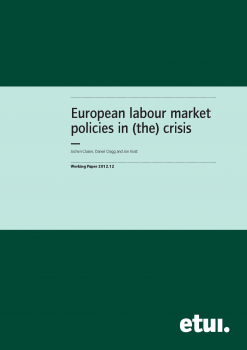 This working paper by Jochen Clasen and Daniel Clegg, of the University of Edinburgh, together with Jon Kvist of the University of Southern Denmark, examines the nature of impact of the economic and political challenges engendered by the “Great Recession” on labour market policy reforms in Europe. The authors thus consider the question of whether the economic crisis has also brought a labour market policy reform crisis in its wake.

The three researchers studied six EU member states (the Czech Republic, Denmark, France, Germany, Spain and the United Kingdom) and observed different response patterns depending on the interpretative framing – or ‘narrative’ – of the crisis.

In the first phase of the crisis, all countries expanded their labour market policy efforts. As crisis deepened, however, there was a clear bifurcation between those states that stepped up structural reforms intended to reduce labour market segmentation and those that turned to a more aggressive agenda of retrenchment.

The authors conclude that their findings provide grounds for both optimism and pessimism. While observing no substantial evidence of a return to the “labour shedding” policies of the 1980s, they do identify a retrenchment of labour market policy in some states, including Denmark, the country that, in the 2000s, was so vaunted in this respect as a model for others to follow.