How do institutions affect the labour market adjustment to the economic crisis in different EU countries? 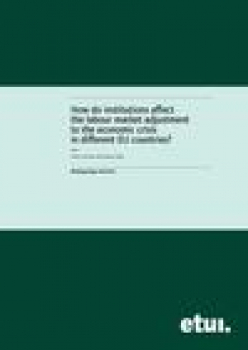 The economic crisis which began in most European countries in mid-2008 has had severe effects on labour markets. Although no country has escaped the crisis, the extent of output losses and the number of jobs lost, as well as the resulting rise in unemployment, vary considerably between countries. In order to shed light on this issue, this paper examines empirically how the current economic crisis has affected the different European economies in terms of the impact on output, and the knock-on effects, influenced by the specific institutional frameworks, on employment and unemployment.

On the basis of comparable quarterly Eurostat data the differences between countries in terms of the way that the loss of output is translated into falls in working hours and head-count employment and rises in unemployment are analysed. A range of institutional factors expected to influence the transmission from output to employment and unemployment is examined for a selected group of four countries (Germany, the United Kingdom, Denmark and Spain).

The cost of living in the EU: how much do you need?

Why far right parties do well at times of crisis: the role of labour market institutions

Labour market segmentation and the EU reform agenda: developing alternatives to the mainstream

Spain’s labour market reforms: the road to employment – or to unemployment?

The Economic and Financial Crisis and Collective Labour Law in Europe

This report reviews the main common traits and variations of the Nordic models of labour market regulation, how they were adjusted after the crises in the 1980-90s, and how recent labour market developments have faced the actors with new challenges.The report focuses in particular on the Nordic collective bargaining systems, describing and... Lire plus

This paper investigates cross-company variation in the core-periphery configuration of the workforce. The empirical focus is on four automotive plants in Germany, which differ in terms of their organisation of agency work. The comparison reveals that there is no automatic relationship between skills, products and company workforce structure. As... Lire plus

This paper analyses whether developments on the labour market and in the welfare system during the economic crisis can be seen as perpetuating the trend towards labour market segmentation or whether the crisis may actually have contributed to containing some of the divisions forged in recent decades. The emphasis is placed on (involuntary) part... Lire plus

This working paper by Jochen Clasen and Daniel Clegg, of the University of Edinburgh, together with Jon Kvist of the University of Southern Denmark, examines the nature of impact of the economic and political challenges engendered by the “Great Recession” on labour market policy reforms in Europe. The authors thus consider the question of whether... Lire plus

Plant-level responses to the economic crisis in Europe

How are social policy actors in major sectors of the European economy responding to the current economic and financial crisis? This working paper summarises the plant-level responses of social policy actors to the symptoms of the current recession between October and mid January 2009. It examines how, during this period, organised labour and... Lire plus

How do trade unions interact with the European Parliament?

Over the past 50 years, the European Union has come to exert an increasingly significant impact on most areas of significance for trade unions, including social policy, industrial relations and labour legislation. This integration process has gone hand in hand with a constant increase in the powers of the European institutions. The aim of this... Lire plus