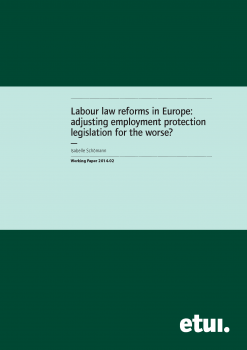 The report critically addresses the large-scale deregulation of employment protection law in the EU member states, which basically started under the umbrella of flexicurity, in particular the EU’s so-called ‘better regulation agenda’, its follow-up ‘smart regulation agenda’ and, finally, the Commission’s annual country-specific recommendations and the memoranda of understanding with programme countries within the framework of so-called anti-crisis measures. The report shows that the EU Commission’s deregulation doctrine not only contradicts primary and secondary European hard law on employment protection, but it also helped to exacerbate precariousness in the workplace and, in combination with other reforms, the pauperisation of workers, thus violating the fundamental rights of workers, as laid down in the Treaty.

Labour in the age of AI: why regulation is needed to protect workers

Digital labour in central and eastern Europe: evidence from the ETUI Internet and Platform Work Survey

Financial participation in Europe: opportunities and risks for employees

The concept of ‘worker’ in EU law: status quo and potential for change

Tax justice in Europe: why does it matter for workers?

Tax avoidance by corporations is widespread in Europe and costs governments more than €70bn annually. This revenue loss, and the legal ramifications of strategies that multinational companies use to avoid paying taxes, starves public services of funding, limits the bargaining power of trade unions and undermines employee rights. This ETUI policy... Lire plus

Free movement of labour in Europe: a solution for better labour allocation?

The European Commission has time and again promoted intra-EU labour mobility as a major contributor to the better functioning of European labour markets. On the other hand, concerns about increasing labour mobility are mounting in a number of member states and populist parties are trying to capitalise on these fears. So, is free movement of labour... Lire plus

Spain’s labour market reforms: the road to employment – or to unemployment?

The Economic and Financial Crisis and Collective Labour Law in Europe

Labour cooperation or labour conflict in the enlarged EU?