Strike development and trends in Europe since the 1990s 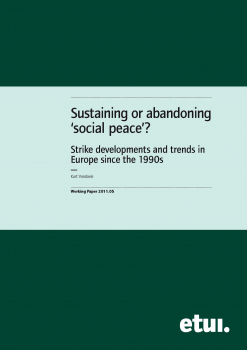 Providing a simple quantitative overview and a short macro-comparative analysis of strike activity in Europe since the 1990s, this working paper assesses whether three strike trends observed in the 1990s continued in the next decade. First of all, there was a continued drop in strike activity measured by days not worked due to strikes. Relative ‘labour quiescence’ was thus also the underlying feature of the 2000s in Europe. Secondly, the rank order in the European ‘strike league table’ shows remarkable stability over a 20-year period. Albeit with a tendency towards convergence, possible future dynamics of workers’ collective action and its meaning will thus almost certainly continue to vary across Europe. Finally, politically motivated mass strikes and demonstrations, especially in the public sector, directed against (planned) government action and legislation to alter employment law were on the increase in the 2000s, with noteworthy effects due to the current socioeconomic crisis. However, it remains to be seen whether an increase in public sector strikes, commonly defensive in nature and seeking to maintain existing employment regulations, will change the continued proliferation of neoliberal policies or stimulate trade union revitalisation.