What did they expect? Lessons for Europe from a retrospective ex-ante evaluation of the first Greek bail-out programme 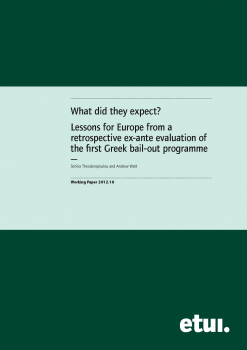 The original Greek adjustment programme, as spelled out in the Memorandum of Understanding signed in May 2010, contained, from the outset, the seeds of its own failure. This is the conclusion of the authors of the present Working paper which assesses, on its own premises, the original adjustment programme that was agreed for the Greek bail-out. More specifically, the authors ask how realistic were the assumptions about the potential effect of fiscal adjustment on output, given Greece’s euro-area membership and the structures of the Greek economy. What is more, they believe that Greece is also a critical case for evaluating the broader strategy adopted by the EU for dealing with the sovereign debt crisis, and that the ‘retrospective ex-ante approach’ adopted here is appropriate to that end. This analysis provides valuable lessons for the adjustment programmes of other bailed out member states (Ireland or Portugal) or those currently in ‘the shadow of a bail-out’ (Spain or Italy).