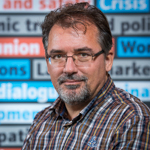 After training as a social worker, Bruno’s trade union career began in 1991 at the Générale de Banque de Belgique, now BNP Paribas Fortis, where he was a member and secretary of the works council and a trade union representative until 2007. He also played an active role in setting up the European Works Council of this banking group. At the same time, he worked as a trainer at the cross-sectoral level for the Belgian trade union confederation FGTB and for the financial sector of Setca, the FGTB-affiliated union for employees, technicians and managerial staff. Bruno joined the ETUI in July 2007. He ran training courses for members of EWCs and the representative bodies of European Companies for the Education department until 2010. He was then coordinator of the European Workers' Participation Competence Centre (EWPCC) until October 2012.