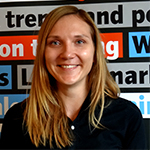 Zane Rasnača holds a PhD (2017) from the European University Institute in Florence. The topic of her thesis was “First or one among equals? The CJEU and the construction of EU social policy”. For her PhD she has received Mauro Cappelletti prize and ELFA 2017 award for the best thesis in European law. She also holds degrees from the University of Cambridge (LL.M, specialization in European law) and the University of Latvia. Before joining the ETUI, Zane was a stagiaire at the Court of Justice of the European Union. In 2014/2015 Zane Rasnača was a Fulbright/Schuman visiting researcher at Yale Law School and Rutgers University. She has worked for the Ministry of Justice of the Republic of Latvia in the office of the Representative before the CJEU. She has taught EU law and human rights courses at the University of Latvia, the European University Institute and Riga Graduate School of Law. Zane is also an affiliated member at the Institute for European Law, KU Leuven. She is the coordinator of the Transnational Trade Union Rights (TTUR) expert network.