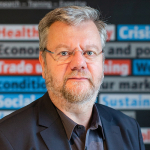 Christophe Degryse is Head of the Foresight Unit at the European Trade Union Institute (ETUI). The Unit aims to provide tools of strategic thinking to the European trade union movement. Its mission is to stimulate reflection on the future of employment and labour markets while providing decision-makers with the instruments that allow them to take this future in hand and help to build it. Prior to this, Christophe published a number of reports and books on the EU, and worked for ten years as publisher of “Social Developments in the European Union”, a yearly publication co-edited by the European Social Observatory and the ETUI. He has in particular developed its main researches in the areas of European social dialogue (at the cross-industry and the sectoral level), EU economic governance and, more recently, the digitization of the economy and its impact on labor markets. He joined the ETUI as a researcher in 2010 and has been responsible for the Foresight Unit since 2016.

uniquement disponible en anglais visit https://benchmarking2020.eu/ A virus is haunting Europe. And it could strike again. This year’s 20th... lire plus