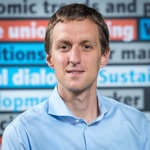 Jan Drahokoupil is senior researcher on multinational corporations. He also coordinates research on digitalization and the future of work. His broader expertise lies in political economy and development, particularly in the context of east European countries. He obtained his PhD in 2007 at the Central European University, Budapest. His book publications outside of ETUI include Transition economies: political economy in Russia, Eastern Europe, and Central Asia (with Martin Myant), Wiley-Blackwell, 2011, and Globalization and the state in Eastern Europe: The politics of foreign direct investment, Routledge, 2009.

Uniquement disponible en anglais This paper presents some of the key insights from the second wave of the ETUI Internet and Platform Work Survey (ETUI IPWS) conducted in 14 member states of the European Union (EU) in Spring 2021. The use of standard probability sampling allows us to estimate the proportion of internet and platform workers, and to... Lire plus

Uniquement disponible en anglais Read the foreword by Luca Visentini, Nicola Countouris and Philippe Pochet. It has almost become a cliché to say that the Covid-19 pandemic has exacerbated pre-existing inequalities while also generating new ones. However, the following pages of this year’s Benchmarking Working Europe clearly reveal that, far from... Lire plus

Uniquement disponible en anglais Providing an insightful analysis of the key issues and significant trends relating to labour within the platform economy, this Modern Guide considers the existing comparative evidence covering all world regions. It also provides an in-depth look at digital labour platforms in their historical, economic and... Lire plus