Planning for the future: is your organization working on strategic change?

ETUI works on Strategic Foresight through its Foresight Unit and through training courses, organized by the Education Department, open to all interested European trade unionists. So far, we have trained facilitators and trade union leaders in the Foresight methodology, with a focus on how to carry... Find out more

Times are changing… New realities arise, and adaptation has become one of today’s most urgent objectives in many different areas. Remote working realities are prompting us to also accelerate the development of new learning pathways. The ETUI education department is rapidly evolving in its eLearning... Find out more 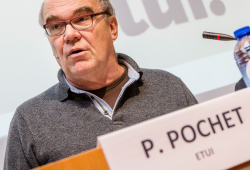 As soon as the new European Commission headed by Ursula Von der Leyen was announced, an ambitious European Green Deal (EGD) was presented with the aim of making Europe the first climate-neutral continent. In short, the pact is divided into nine areas of action (biodiversity, food chains, agriculture... Find out more

Who will pay? Questioning the “deficit myth” One of the big questions raised by the Covid-19 crisis and by the plans for a Green New Deal to confront the climate emergency is: how are we going to pay for all this? Governments’ deficits are piling up and the ideologues of austerity are already... Find out more

What are social partners saying about the European Green Deal?

The ETUC on the European Green Deal: ahead of the announcement of the EGD, the ETUC pointed to the urgent need for ambitious climate policies that should be inclusive and supportive to the most vulnerable regions, sectors and workers. The position paper emphasised that a concrete just transition... Find out more

Olivier De Schutter is co-chair of the International Panel of Experts on Sustainable Food Systems (IPES-Food). He took part in the ETUI webinar ‘A crisis within a crisis: the European Green Deal back on track after Covid-19?’, analysing what is at stake with the ‘Farm to Fork’ strategy. We took the... Find out more

The circular economy and “green jobs”: a new space for social dialogue?

Thirty-five. This is the number of legislative initiatives announced in the Circular Economy Action Plan, entitled “For a cleaner and more competitive Europe”. They are expected to appear between 2020 and 2023. Presented by the European Commission on 11 March 2020, this plan is one of the more... Find out more

In the wake of the COVID-19 pandemic, the European Union (EU) could very well be confronted with the greatest recession that it has known for a century. In this context, the European Commission presented, on 27 May 2020, a proposal of the recovery plan ‘EU Next Generation’. This plan proposes to... Find out more

Date of publication: 16/07/2020 Deadline for submission of applications: 03/08/2020 Call for the Subcontracting of Programme Virtual Reality Development, implementation & Coaching of ETUI tutors and experts The programme is intended to provide ETUI the capacity and the instruments for the... Find out more

Date of publication: 16/07/2020 Deadline for submission of applications : 03/08/2020 Call for the Subcontracting of Design, Development, implementation and evaluation of 5-week tutor-based Online Workshop on Active Learning Methods The course is intended to provide participants with state-of-the-art... Find out more