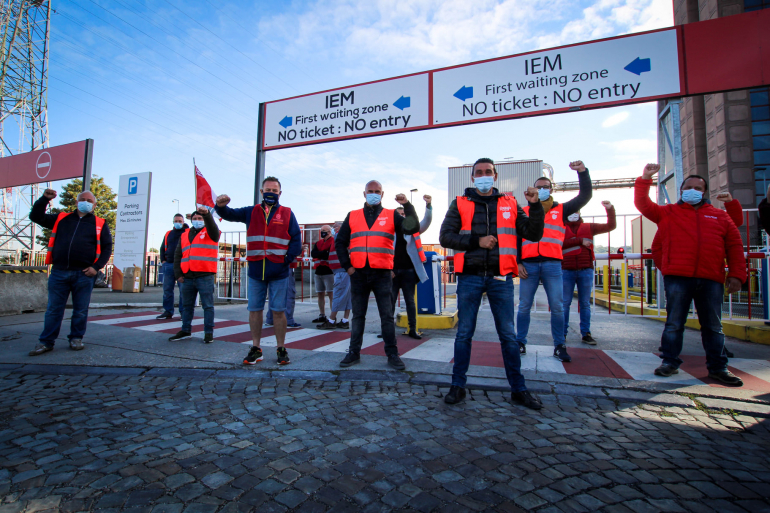 Workers at the Jupille brewery near Liege (Belgium) came out on strike on Thursday, 3 September 2020, claiming insufficient protection against Covid-19. Despite strong pressure from the company, the strike is now in its second week. Workers in other breweries also belonging to the AB Inbev group have downed tools in sympathy. The conflict arose due to many issues associated with the company’s policy on Covid-19. The final straw occurred at the end of August 2020 when two workers informed the HR department that they had been tested positive. Tasked under Belgian legislation with protecting workers in all companies with 20 or more workers against health hazards, the brewery’s internal prevention and protection department (SIPP) had not arranged for any testing or tracing contacts, said José Borrego, a shop steward in the company.

It was only on the initiative of shop stewards that workers had themselves tested. It turned out that 10 workers had contracted the virus (of the 180 tests carried out on the brewery’s 800-man workforce). The majority of cases were in the logistics area, though workers in other areas were also contaminated. Of the 10 workers tested positive, two are in a serious condition. Hospitalised, they have been placed in artificial coma.

On 3 September 2020, the brewery’s workers came out on strike, calling for the departure of the HR director and the prevention officer heading the SIPP. The company has reacted by questioning the right to strike, calling in the courts to put pressure on the pickets. It has managed to get an injunction banning workers from blocking access to the plant. It has also sent threatening messages to the strikers. In the course of the following week, workers in other breweries belonging to the group downed tools in sympathy with the Jupille workforce.

A Belgian-Brazilian multinational, AB Inbev is the world’s largest brewing company. Its M&A policy has seen it gaining control of more than 500 beer brands worldwide, including such household names as Budweiser, Stella Artois and ... Corona.

Over and above this specific case relating to AB Inbev, this conflict highlights the importance of having worker representatives monitor the continuation of / return to work in a Covid-19 context. According to the Flemish Public Health Agency, the majority of post-lockdown Covid-19 hotspots in Belgium are in companies and schools.