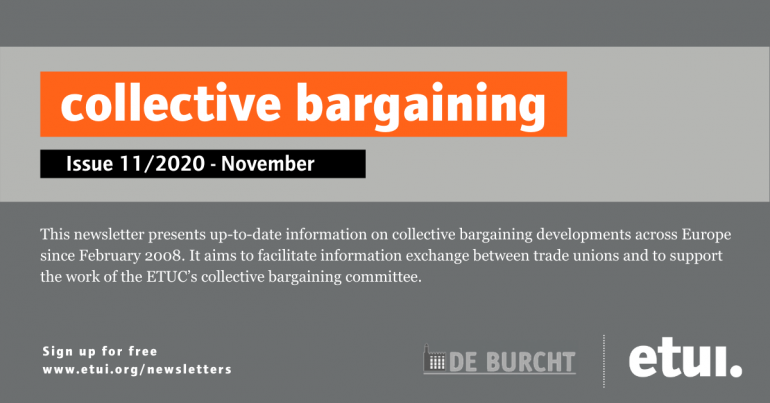 Highlights of the October issue of our collective bargaining newsletter with the most important developments at European and member state level.

The insurance sector, that employs some 150,000, intends to address the transformation environment that is altering its business and its occupational professions by strengthening anticipatory management of jobs, skills, and lifelong occupational training. The French Insurance Federation (FFA) together with four trade unions, CFDT, CFE-CGC, UNSA and CFTC, signed a new agreement on these topics on 15 September, which was made public on 17 November.

Trade union IG Metall adopted its demands for the next bargaining round starting mid-December and covering more than 3.8 million employees in the metal and electrical industry. The demands include a volume of 4%, which can be used to strengthen wages and training allowances and to finance measures to safeguard jobs. The duration should be twelve months. Further topics are the improvement of the quality of training and the permanent hiring of apprentices and of workers in the dual training system.

Ireland - Public health doctors back on strike over pay and contracts

Public health specialists, who have a key role in dealing with the COVID-19 pandemic, have overwhelmingly voted for industrial action, up to and including strikes, in a dispute over pay and contracts. The doctors, who are represented by the Irish Medical Organisation (IMO), voted by 94% in favour of industrial action.

As from 1st January 2021, the national minimum monthly salary will be raised from €430 to €500. Currently, approximately 20% of employees receive the minimum wage or less, and the majority works in the private sector. The minimum wage was unchanged for the last three years.

Soldiers across all divisions will receive higher allowances as part of a sectoral agreement reached between the Government and the General Workers’ Union. From the agreement 1,750 soldiers will benefit. Soldiers will also receive compensation for any work done above the 40-hour week. Additionally, all soldiers ranked Major or lower will benefit from a higher pay grade.

Find out more in the November issue