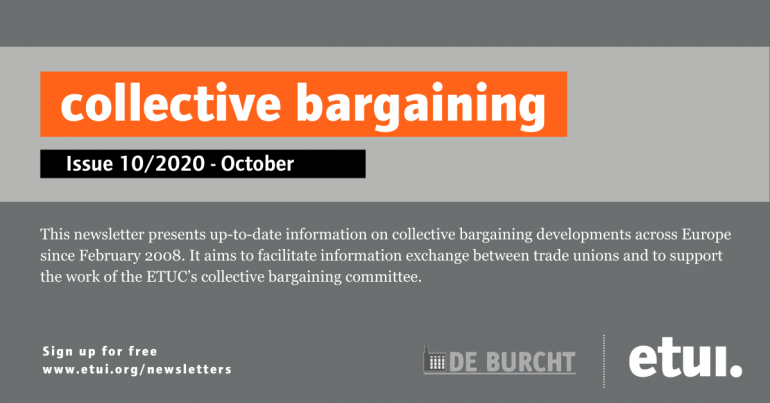 Highlights of the October issue of our collective bargaining newsletter with the most important developments at European and member state level.

The European Commission proposes an EU Directive to ensure that the workers in the EU are protected by adequate minimum wages allowing for a decent living. When set at adequate levels, minimum wages do not only have a positive social impact but also bring wider economic benefits as they reduce wage inequality, help sustain domestic demand and strengthen incentives to work. The proposal also aims at promoting collective bargaining on wages in all Member States.

The employers in the Finnish forest industries announced their intention to withdraw from national collective bargaining and transfer future negotiations on wages and working conditions to the company level. The change is historic and significant, as the forest industry, which covers paper, pulp and wood, is one of the largest in the country. The value chain of the forest industry employs 140,000 people and accounts for about one-fifth of Finland’s exports in goods.

As a result of intensive negotiations public services union Ver.di has negotiated a new collective agreement covering 2.3 million workers in municipal and federal government with specific measures benefiting employees in health and social care. The agreement came after the third round of negotiations with the employers pushing for a long-term deal (up to 2023) and annual pay increases of only 1%. In the end, Ver.di was able to secure what it describes as a respectable deal that delivers a 1.4% pay rise for all workers on 1 April 2021 with a further 1.8% increase in April 2022. The agreement runs until 21 December 2022.

Self-employed workers are one step closer to paying contributions based on their real income, rather than a fixed monthly amount regardless of how much they make. The Social Security Ministry and the Tax Agency are sharing data to come up with a new system based on income brackets, similar to what is already done with Spanish income tax (IRPF). Under the current system, freelancers can choose the contribution base that they want to pay a rate on.

UK - New government scheme to pay up to half of wages

The Government informed that it will increase support for jobs and workers hit by Covid restrictions after growing clamour from firms in tier two areas, in particular the hospitality sector. The Government announced big changes to the Job Support Scheme (JSS) - set to replace furlough in November. Instead of a minimum requirement of paying 55% of wages for a third of hours, as announced in September at the launch of the Winter Economic Plan, employers will have to pay for a minimum of 20% of usual hours worked, and 5% of hours not worked.

Find out more in the October issue