Edito#69: What makes this time different (so far)? 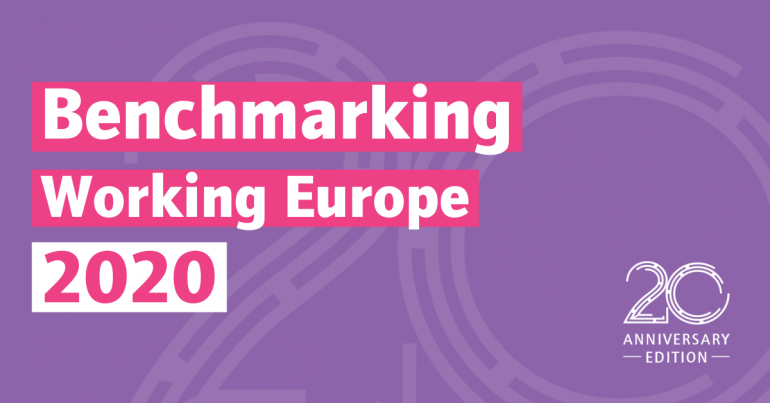 This year’s Benchmarking Working Europe report – the joint flagship publication of the ETUI and ETUC – is a special edition, not only because it is the 20th-anniversary edition, but also because it analyses the consequences of a new and totally different crisis for the world of work. And the main message coming out of this analysis is that we need to be very vigilant to protect workers, and Europe as whole, not only from the SARS-CoV-2 virus but also from austerity.

It must indeed be acknowledged that policymakers seem to be approaching this new challenge in a different way than the austerity-driven responses deployed a decade ago in the management of the ‘Great Recession’ of 2008. There is a high expectation that rather than instigating a descent into years of recession, this crisis may in fact be an opportunity for a substantial rethinking of the economic and social paradigms that are to guide the EU in the post-Covid world. There are some key signs that things could be moving in this direction, not least the willingness of the EU and national leaders to bail out not only the banks and financial institutions, as was mainly the case in 2008-13 but also the real economy, with instruments such as the ‘Support mitigating unemployment risks in an emergency’ (SURE) programme, followed by the much more substantial Recovery and Resilience Plan. What is also important is that these rescue packages do not, so far, come with any explicit (anti-)social strings attached – the EU even allowed the Member States to deviate from the Union’s usual budgetary rules via an escape clause in the Stability and Growth Pact. And last but not least, this time trade unions are not being side-lined from the planning stages of the recovery strategy and could in fact play a role in its implementation.

Having said this, it is also important to remain cautious regarding these new policy initiatives, which are the result of a fragile political compromise. The forces that, just a decade ago, promoted neoliberalism and fiscal discipline as the ‘natural’ response to growing levels of debt have not disappeared, and the recovery programmes are time-limited. There is no guarantee that the next time decisions need to be taken, these forces will not gain the upper hand in policy debates. We still need to define which investments will be most effective in bringing us onto a path out of the Covid-19 crisis that is socially just and ecologically sustainable. In this sense, it is also essential to recognise the redistributive function of decent working conditions and fair wages, as well as to acknowledge the importance of industrial democracy as a key pillar of the current recovery strategy and of the Green Deal.

This is the last editorial in a year that we are all most probably happy to leave behind. The virus, something not many among us expected, forced us to adapt our living and working lives. If this has not been something we liked, we can at least say that we found ways to manage throughout this difficult period, and we now deserve a relaxing break. Let me, therefore, wish you, and your nearest and dearest, a safe and peaceful end of the year – and may 2021 mark a new beginning for us all.