Editorial: The Green New Deal after the Biden victory 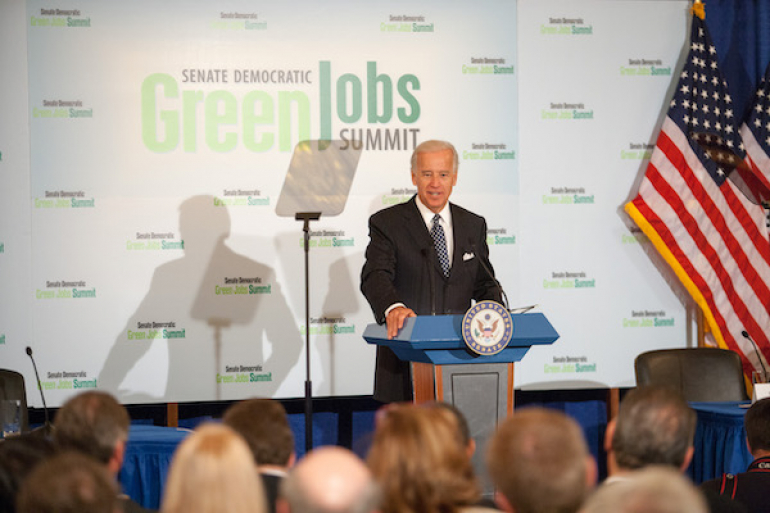 A collective sigh of relief and celebration was heard around the globe when the media on  November 7th finally announced Joe Biden as the new President-Elect of the United States. It was not the projected blue-wave expected by many, instead, it was a convincing but still contested victory dissolving any belief that Trump's 2016 win was a historical accident. While Trump will no longer be the president of the United States, his political legacy will possibly haunt the country for a long time. This and the possible lack of a Congress majority (up to a run-off in two Georgia districts in January) will limit Biden's manoeuvres in bringing the legislative changes that th country desperately needs.

Apart from the importance of this election for America (defining its course of development for decades) and for world politics (multilateralism) its single most important effect will be how the world will manage to deal with the climate crisis. Under Trump, the critical 1.5 °C warming target would have become impossible to reach with all the disastrous consequences as the IPCC 2018 report forecasted. In spite of progressive policies at the state level, by leaving the Paris Agreement and continuing fracking oil and gas, a future Trump administration could have led the world over the point of no return. One should not forget that the US ‘fracking revolution’ was not only a matter for the country itself, but it has also reshaped the world market by prolonging the era of fossil fuels.

But what can we realistically expect from the new US government in 2021? Biden considers climate change an emergency and has promised to re-join the Paris Agreement. Following up on the US Democrats Green New Deal (GND) initiative, a massive green investment wave of up to 2 trillion USD was promised, with the fast deployment of renewables and electric vehicle charging stations. The target is 100% clean electricity by 2035 and climate neutrality by 2050. On the other hand, Biden did not seem very convincing in the second presidential debate to Trump's question on phasing out fossil fuel. The election results in Kentucky, West-Virginia or in the Dakotas showed the reason for his hesitation. The massive support for Trump in these fossil fuel depending regions, but also in the old industrial rustbelt will make it very difficult to get a progressive and ambitious climate policy through, especially with a very likely lack of Congress majority.

This points to a weakness in Biden's approach and, in a broader context,  on how unions are split on the issue. Although the idea of a "just transition" was born in North America, the GND does not fully recognise the role of public funding in a just transition by facilitating and actively supporting the transition process. While the BlueGreen Alliance,  includes 13 labour unions is in broad support of the Biden plan and developed a policy guide for just transition, it doesn't discuss the sensitive issue of compensating displaced workers. This concept of "just transition",  builds mostly on environmental and climate justice with a strong focus on racial (and first nation) justice and on future green, quality and unionised jobs but focusing less on coal, oil and auto workers.

Unions in energy-intensive industries on the other hand do not support any climate legislation that doesn't include a significant and specific program to help workers and communities disproportionately impacted.

A significant part of such funding should help (mostly white and male) fossil industry workers to find a new future perspective making sure that they will not lose on a green transition .  Convincing them, or at least dissolving some of their fears, seems to be as important as launching ambitious climate and environmental policies. Europe is far from perfect in this regard, but still has some lessons to offer.

*Opinion disclaimer: The views and opinions represented in this newsletter belong solely to the authors and do not represent those of the ETUI.