Editorial: What’s green inside the latest State of the European Union 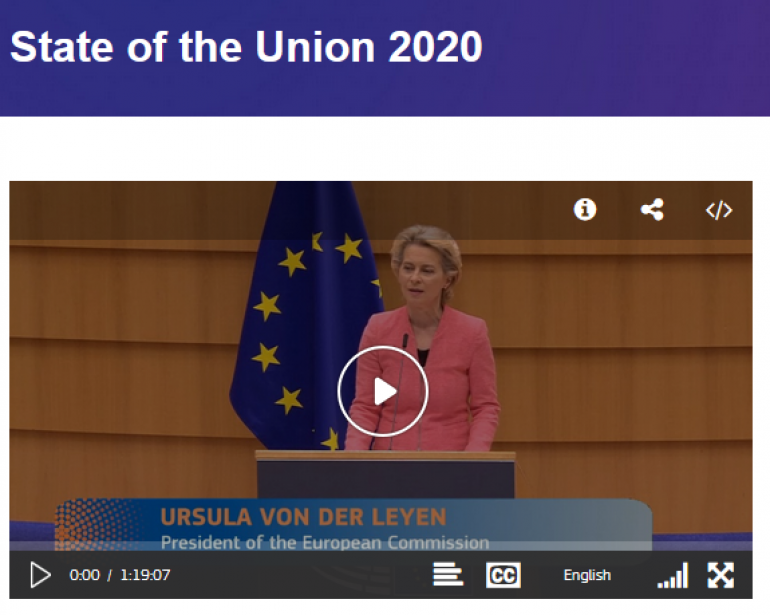 “The future will be what we make it. And Europe will be what we want it to be” is the voluntaristic motto written on top of the State of the Union webpage of the European Commission. Europe “has the vision, the plan, the investment” to “become green, digital and more resilient”, is the story Ursula von der Leyen tried to convey with energy and determination.

And, of course, there are certain developments to celebrate. The EU budget deal (long-term budget for 2021-2027 and the Next Generation budget) was a historical compromise reached among 27 members states after four days of tough negotiations. Also, after years of austerity and social deregulation as a response to the financial crisis, the Commission and most member states are (be it slowly) redefining the essential role of social Europe and its main stakeholders including the trade unions. The need to tackle the climate crisis is now seriously defined in the EU’s future course and the challenges of the digital revolution and the need to regulate the online economy seem to be better understood than before.

But the Green New Deal rhetoric has still to be followed up with real structural policies which go far beyond the old paradigm of “the new growth strategy” and put some real meat on easily-defined targets such as “55% greenhouse gas emissions reduction by 2030 compared to 1990”. In the State of the Union address,  President von der Leyen rightly said that the wealth focus of our economic policies has to be replaced by a “wellbeing” focus. Still, she probably forgot to mention that this has to happen within the ecological boundaries of the planet and respecting the social boundaries for a more equal society (see the “doughnut” economy model of Oxford economist Kate Raworth).

Other perils which might undermine the President’s journey to the ‘new vitality’ EU will be the announced ‘European Health Union” (health policy still being a national competence), the upcoming migration pact, the rule of law imperatives for Hungary and Poland, the difficult relationship with Russia, Turkey, China, a divided USA, and the resurgence of the no deal Brexit with the UK. Can the ‘fellowship of the 27’ survive this dangerous journey?

In this second issue of the ETUI’s Green Deal newsletter, you will find articles on the recent budget deal in the European Council, the approach of the ETUI’s Education Department on training for green competences, an interview with ETUC confederal secretary Ludovic Voet on Just Transition and the EU budget, as well as green-reading tips and new publications.

Have a good read and stay safe!

*Opinion disclaimer: The views and opinions represented in this news piece belong solely to the author and do not represent those of the ETUI.