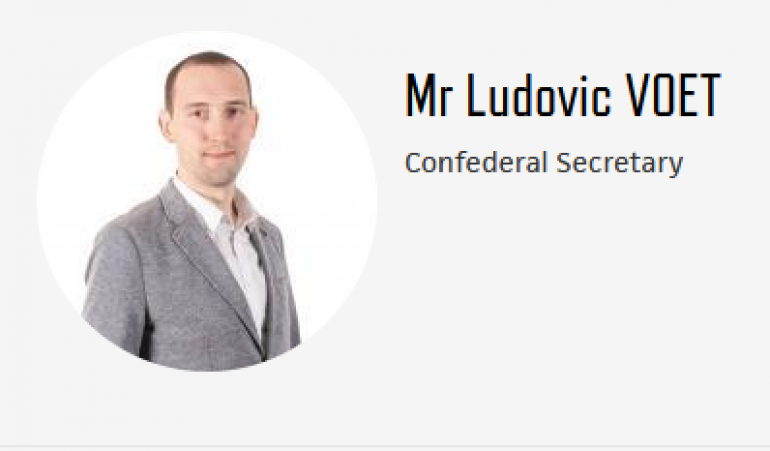 Ludovic Voet is confederal secretary of the European Trade Union Confederation. His responsibilities at the ETUC cover sustainable development and climate change, migration, youth policy, non-standard work and the platform economy, education and training, and equality and non-discrimination, plus organising.

To deal with climate change, we have two possible strategies that are complementary. We can try to prevent these changes from happening by reducing our greenhouse gas emissions and we can try to adapt to those changes. Adaptation means taking action to prevent or minimize the damages that climate change can cause.

While reducing greenhouse gas emissions in a fair way remains the priority of the ETUC, it has become clear that we now also need to think about how we can adapt to protect most vulnerable individuals and communities. The past five years have been the warmest in the modern records, 18 of the 19 warmest years have occurred since 2001. This increase in temperature is accompanied by extreme weather events such as floods, droughts, wildfires that are becoming more intense and more frequent.

All these changes have serious consequences for workers in several sectors. For example, construction workers increasingly suffer from heatwaves and increased UV radiations that put their health and safety at risk. In parallel, firefighters and nurses experience a surge workload and stress due to more frequent wildfires, extreme weather events or due to the upsurge of new illnesses and diseases. Other sectors, such as agriculture will likely see dramatic changes in employment over time. Even the energy sector and industry will be affected when, for example, there will not be enough water to cool down a nuclear plant or if extreme weather events block their supply chains or cause damages to infrastructures.

Q: The latest budgetary agreement among member states at the EU level was made possible by reducing the ambitions for a greener Europe. Are you disappointed and what do you believe is the role of the European Parliament in changing such situation?

The agreement reached by the EU Council is a promising first step in terms of solidarity between Member States although the initial proposal from the Commission has been watered-down. It is also positive to see that the EU Council managed to react faster than during the previous crisis.

Still, the climate dimension of the agreement is somehow disappointing. Although the Council agreed to allocate one-third of the funds to fight climate change, we see that one of the big losers of the negotiations is the Just Transition Fund which was downgraded from €40bn to €17,5bn. This raises questions as we know that this fund is one of the key tools foreseen by the European Commission to support carbon-intensive regions and industries in their transition to carbon neutrality. We also regret the fact that the deal did not link access to the fund with the signing of EU’s target of reaching net-zero emissions by 2050.

The ETUC hopes that the European Parliament will use its full leverage to reverse these cuts and step up the EU’s climate ambition. This is vital if we want to achieve a just transition for all workers, that leaves nobody behind. The ETUC has shared this demand with President Sassoli and the leaders of the political groups.

Q: How do you analyse the positioning of the trade union organisations and the youth movement around climate change issues?

The ETUC and the ETUC Youth Committee have been very active over the last year to develop strong links between the youth movement and trade unions. For example, the ETUC, together with many of our national affiliates, publicly supported the youth climate demonstrations & strikes and joined students and young activists in the marches for the climate.

I see the Youth Movement and the Trade Union movement as complementary. The objective of the youth movement is to promote the environmental agenda and to push our policymakers to act faster against climate change to preserve their future. The objective of trade unions is to make sure that these climate policies are social and fair, and that they provide sufficient support to the most exposed and vulnerable workers, regions and communities. There are no jobs on a dead planet and we, as ETUC, therefore join their call for an ambitious climate action. At the same time, however, it is clear that if climate policies are not unjust and hamper inequalities, there will be no public support for them and climate action will lack social acceptance.