Since early 2021, global oil prices have doubled, coal prices have nearly quadrupled and European natural gas prices have increased almost seven-fold. Spiralling inflation has sparked a cost-of-living crisis across Europe, and governments are stepping in to try to shield households and businesses from its effects.

In most European countries, higher energy prices impose an even heavier burden on low-income households because they spend a larger share of their budget on electricity and gas. An IMF working paper calculated the divergence in the distributional impact of higher prices across countries and income groups and shows that in most EU Member States the cost of living increase due to higher energy prices is significantly higher for the poorest 20% of the population than it is for the richest 20%. Estonia is the most extreme case where in 2022 this projected cost-of-living increase for the poorest 20% would be 25%, while for the richest 20% it would only be 14%. Italy, Belgium, the Netherlands, Portugal, and Spain all show more than 50% higher living cost increases for the poor than for the rich. Austria, France, Germany, Denmark, and Sweden show only a moderately higher impact on the poor, while in two Member States, Bulgaria and Romania, the poor are expected to be affected less than the rich.

The overall responses can be divided into two main groups: immediate and medium-term measures. The former aim to minimise the impact on end-users while the latter – most prominently represented by the REPowerEU Plan launched by the Commission in May 2022 – consist of strategic plans to accelerate the transition to green energies, cut the dependence on Russian fuels, diversify suppliers and reduce a demand focused primarily on gas. European Union Member States are largely responsible for their national energy policies, and EU rules allow them to take emergency measures to protect consumers from rising costs. This overview focuses on short-term responses at national level.

These responses to the energy cost surge have so far been mostly broad-based, price-suppressing measures, including subsidies, tax cuts and price controls.

According to the IMF, policymakers should shift decisively away from broad-based measures to targeted relief policies, including income support for the most vulnerable. For example, the working paper calculates that fully offsetting the increase in the cost of living for the bottom 20% of households would cost governments 0.4% of GDP on average for the whole of 2022, while extending it to the bottom 40% would cost 0.9% of GDP. A CEPR report also argues that targeted income support is the most social and climate-friendly measure for mitigating the impact of high energy prices.

With regards to measures oriented specifically to end-users, each country decided to implement a particular set of rules depending on their specific context and market framework. In general terms, those measures consist of VAT and tax reductions, bill discounts, price limitations, and different forms of bonuses or funds for vulnerable households, as well as clawbacks, revenue deductions and bailouts for companies. Only Spain and Portugal enacted measures that affect the redesign of the power market and its decoupling from gas. The 2022 March European Council decided to allow both Spain and Portugal to implement specific price decoupling measures considering the ‘Iberian singularity’. These are the only national measures that affect wholesale prices, all others focus on retail prices. A summary of the national measures can be found in Table 1. 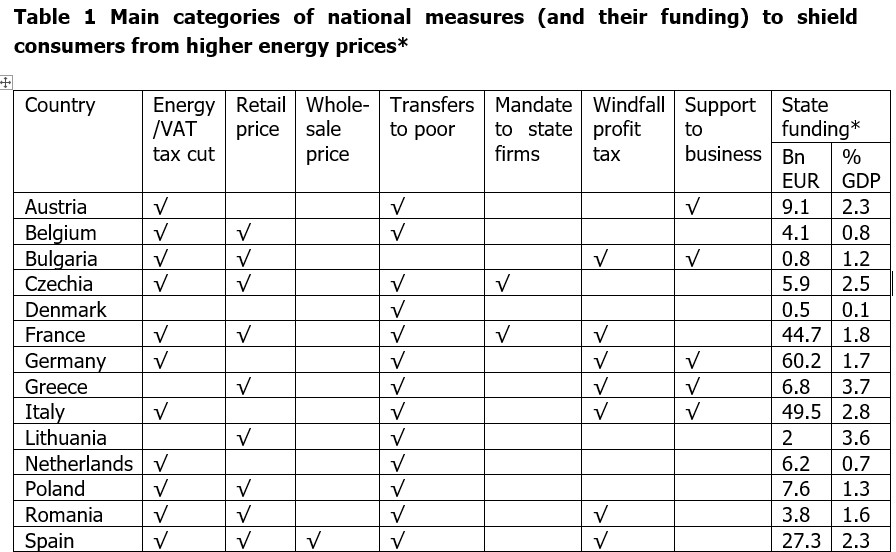 For the size of the measures, there are significant differences across Member States. Greece has spent the most on energy price relief measures when compared to its GDP, 3.7%, while Denmark has spent the lowest with a mere 0.1%. Lithuania, Italy, Czechia, and Spain followed (all over 2% of GDP), while France and Germany spent close to 2%. In absolute terms, Germany has spent the highest amount: 60.2 billion euros.

Summary of measures by selected countries

In May 2022, Bulgaria has approved a 2 billion levs (€1 billion) package aimed at shielding companies and low-income consumers from the surge in energy and food prices caused by the war in Ukraine. Since July, the government is also offering a discount of 0.25 levs (€0.13) per litre of petrol, diesel and liquefied petroleum gas and methane until the end of the year, and is scrapping excise duties on natural gas, electricity, and methane.

Greece has spent about €7 billion in power subsidies and other measures since September 2021 to help households, businesses and farmers pay their electricity and gas bills. The subsidies absorb up to 90% of the rise in monthly power bills for households and 80% of the rise for small and medium-sized firms.

A tariff shield has been put in place for gas prices, with regulated tariffs being frozen at their October 2021 level for the duration of the winter (and further extended until the end of 2022). The state will cover the additional costs incurred by suppliers because of this freeze, in accordance with the provisions set out in the 2022 Finance Act.

An inflation allowance of €100 was also granted to the 38 million people with a net monthly income below €2,000 (over 60% of households).

State-owned energy provider EDF was forced to limit electricity wholesale price rises to 4% for a year. The move is expected to cost €8.4 billion.

A complete elimination of the renewable energy levy (EEG-Umlage) was implemented in July 2022. The surcharge covered the guaranteed feed-in tariff for renewable energy installations, which is guaranteed by law to renewable power producers for 20 years. The federal government will cover the costs, partly using income from the sale of carbon allowances.

The federal government approved two relief packages for a total of €30 billion to help its citizens with rising energy prices in 2022 and proposed a third package in September.

The value-added tax on natural gas has been decreased from 19% to 7% until the end of March 2024.

A one-off energy price flat-rate support of €300 is offered to all taxpayers, transferred to them via their employer's payslip. Families receiving child support will get an extra €100 per child, while people on benefits will receive a €200 one-off payment. Those on housing assistance will get a €270-worth top-up for people on housing assistance. The country has offered subsidised combined public transport tickets for a price of €9/month for a duration of the three summer months.

German households will have to pay almost €500 more a year for gas due to a new levy – to be imposed from October 2022  – helping utilities cover the cost of replacing Russian supplies.

On 4 September 2022 the federal government announced the third and biggest compensation package.

Most of the measures are targeted, including one-off payments to pensioners and students (not included in the previous two packages), the increase of family support and social benefits, and the contribution to housing costs for the most vulnerable. The package increases the already existing support for home-office and commuting costs and will find a successor scheme for the successful €9 public transport ticket.

The biggest effect can be expected from the ‘electricity price brake’, as a yet-to-be defined amount of electricity will be offered to households at a limited price. This compensation is expected to be financed mostly from the introduction of a `revenue cap’ for energy companies by taking away extra profits due to the higher energy price (but not calling it a tax). The government also confirmed its commitment to the net-zero debt rule. Taking all three packages into account, with nearly €100 billion Germany will have spent the largest amount for compensation in the EU. Germany will also be one of the frontrunners when this spending is measured as a share of GDP, but here Greece and Lithuania are still on the top, with Italy not far behind.

In October 2021, the Italian government announced an initial relief package of gas and power price reductions for industrial consumers and households, reducing levies on power prices (around €10 billion up to mid-2022).

In March 2022, the government announced new measures that included fuel price reductions of 25 cents, an increase in the number of beneficiaries of social bonuses (increasing the number of eligible families from 1.2 to 5.2 million) and an increase of tax credits for energy-intensive electricity and gas companies. These measures are expected to be covered by windfall tax revenues.

In early August 2022 Italy approved a new aid package worth around €17 billion to help shield firms and families from surging energy costs and rising consumer prices. It comes on top of some €35 billion budgeted since January to fight the cost-of-living crisis.

The government also plans to extend a €200 bonus paid in July to low and middle-income Italians who did not previously receive it.

Finally, Italy has announced its intention to tax companies profiting from higher energy prices and is promoting a cap on gas prices at European level to help contain price spikes.

The Dutch government has offered eligible households a one-off energy allowance of €800.

In October 2021, the Polish government submitted a bill to shield the most vulnerable 20% of households from the spike in energy prices. A similar measure was designed for the agricultural sector.

In November 2021, the government announced a package of tax breaks and contributions for the vulnerable worth more than €2 billion.

In January 2022, a second ‘anti-inflation shield’ was introduced: VAT on food, gas and fertilisers reduced to 0%, on petrol and diesel to 8%, and on heating to 5%. Financial aid measures to shield public administration entities were also rolled out.

In April 2022, the government extended the tariff protection of individual customers and the so-called ‘sensitive recipients’ – e.g., hospitals or kindergartens – until 2027.

An allowance to help households struggling with energy bills has also been strengthened, to provide a maximum of €106 per person per year based on income, type of heating and the number of people in the household (the largest of which can receive up to €306 per year) to cover 7 million households.

The government is also working on a new package labelled the ‘Putin shield’ to apply to those parts of the economy that have suffered because of Russia’s invasion of Ukraine.

In September 2021 a Royal Decree was adopted to establish a temporary deduction of market revenues for non-CO2-emitting power plants to reduce customers’ bills.

In October 2021, another Royal Decree was adopted that increased the social bonus to vulnerable consumers from the current 25% to 60%, and from 40% to 70% in the case of severely vulnerable people. Moreover, the budget for the thermal social bonus was doubled in 2021, rising to €202.5 million.

Like Italy, Spain has decided to tax those energy companies profiting from the increase in energy prices and use the money raised to help its citizens pay the bills.

Together with Portugal, Spain is currently enforcing a one-year long cap on gas prices, agreed by the European Commission, which ensures they remain lower than an average of €50 per megawatt-hour.