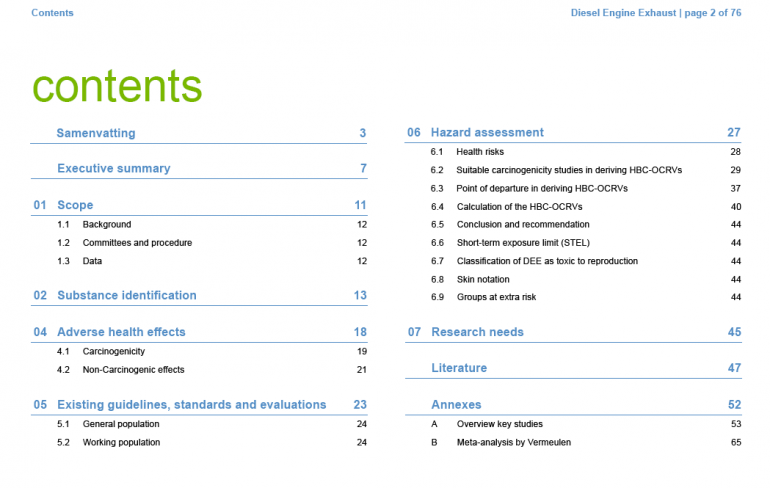 The revision of the European directive on the protection of workers exposed to carcinogens has resulted in diesel engine exhaust emissions coming under its scope (Directive 2019/130 of 16 January 2019). Diesel engine exhaust emissions are made up of a cocktail of hazardous chemical agents, with their composition dependent on different factors (type of engine, use of filters, maintenance, etc.). Workers in the European Union are massively exposed to these carcinogenic emissions, with estimates stating that 3.6 million workers are affected in sectors such as construction, public works, transport or other companies working with diesel engines. Not part of the European Commission’s original proposal, the inclusion of such emissions in the directive’s scope is the result of an amendment adopted by the European Parliament by a large majority.

The occupational exposure limit value adopted by the European Union is 0.05 mg/m3 measured as elemental carbon. Such a level leaves a high residual risk of cancer. Member States have to comply with the new level by 21 February 2023 at the latest (3 years later for the sectors of underground mining and tunnel construction). The European OELs represent minimum standards, with each Member State allowed to adopt stricter levels better protecting workers’ lives and health.

On 1 July 2020, the Netherlands decided to adopt a 5-times-lower OEL of 0.01 mg/m3, an OEL currently affording workers the highest level of protection in Europe. Trade unions in other European countries are seeking to generalise this move, not waiting for the 2023 deadline. For its part, the Dutch Public Health Council has produced a report highlighting the need to continue lowering exposure levels.