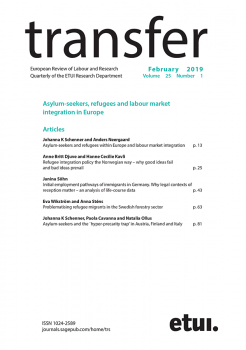 ‘War, human rights violations, underdevelopment, climate change and natural disasters are leading more people to leave their homes than at any time since we have had reliable data. More than 60 million people — half of them children — have fled violence or persecution and are now refugees and internally displaced persons. […] But this is not a crisis of numbers; it is a crisis of solidarity. Almost 90 per cent of the world’s refugees are hosted in developing countries.’ (Ban Ki-moon, 9 May 2016)

In 2015, in Europe, this ‘crisis of solidarity’ was referred to as a ‘refugee crisis’, as asylum-seekers from Syria, Afghanistan and Iraq in particular reached EU Member States via Turkey. This route of seeking refuge was halted by the EU-Turkey deal in 2016. These events, including the reactions of the EU, its Member States and EEA countries, have led to an increasing amount of research being done on the status and implementation of the 1951 Refugee Convention. The large number of asylum applicants and refugees (we include here beneficiaries of subsidiary protection) after 2016 has also sparked interest in research focusing on the reception and situation of these categories of migrants. One particular issue is their labour market situation. Whereas most research on migration and integration has focused on migrant workers, there is an increasing interest in exploring issues relating to the ‘integration’ of asylum-seekers and refugees, where labour market integration is a major issue. This special issue of Transfer presents research and background articles dealing with a range of aspects related to labour markets of the EU, its Member States and EEA countries, including regulations, integration schemes and the situation of asylum-seekers and refugees.