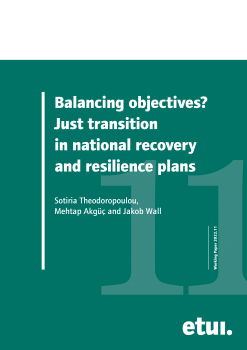 This paper assesses how well national recovery and resilience plans (NRRPs) aim at jointly tackling the social and climate/environmental challenges of recovery from the crisis and the transition to a net zero carbon socioeconomic model. Drawing on the conceptual frameworks proposed by Mandelli (forthcoming) and by Sabato et al. (2021) on how economic, social and green objectives can be integrated in general, and more particularly in the EU Recovery Policy framework, this paper goes a step further and examines NRRP documents as well as secondary evidence from, among others, the assessments of the European Commission. We develop some indicators which operationalise, at ‘bird’s eye view’ level, the balance between policy interventions aiming at social and green objectives and which explore how well they promote the concept of ‘just transition’. Moreover, the paper looks in more detail at the plans of France, Greece and Germany to provide more qualitative evidence on how these countries have articulated their proposed policy interventions to have a joint impact(s) on both green and social objectives.

Our analysis suggests that planned spending from the Recovery and Resilience Facility (RRF) is tilted in favour of green transition objectives relative to social objectives. This might be a reason for concern about a new imbalance at the expense of the EU’s social dimension, beyond that already in existence with regard to the economic dimension; namely that there is an imbalance between the environmental/green dimension and the social one. Such a new imbalance, however, will also depend on a Member State’s capacity to cushion the impacts of the green transition beyond the use of RRF funds.